Share All sharing options for: Doug Gottlieb Would Prefer Syracuse Fans Not Pop Off, Stop Balding

One of my favorite parts of this season is that once the dust settled, the critics quieted down, the doubters were converted and the pollsters convinced...we were left to duel it out with our arch-enemy, Doug Gottlieb. The Lex Luthor to our Superman. The Joker to our Robin. 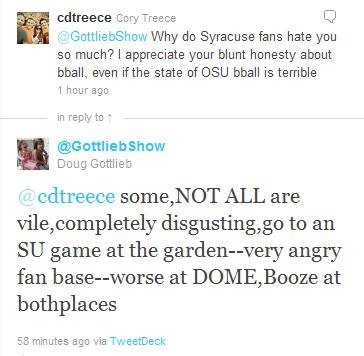 After Syracuse's win over Georgetown, I'm guessing some Syracuse fans wanted to let Doug know they won the game. You know, a friendly heads-up. Doug, to his credit, towed his own party line.

So Cuse gives up 23 ORBs at home,survives G-Town at home and Orange fans are popping off-did u watch Kentucky?

SU fans are probably ugly, too. And balding. Definitely balding. Someone should help them with that problem. I mean, really target them and their problem. 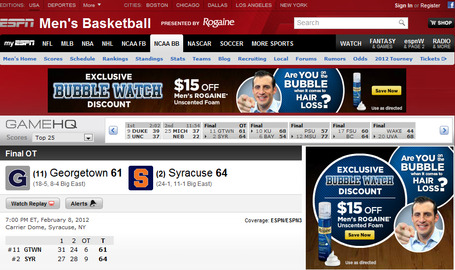