Time for your weekly edition of It's Taco Time in the Salt City! Losing opening tips, shoddy Dome concessions, and crummy walk-ons...but what irrelevant things about SU basketball truly annoy?

Share All sharing options for: Taco Time: Eight Irrelevant Things About Syracuse Basketball That Are Annoying

When your team becomes a juggernaut, there are less things to complain about. Which sucks. One of the only reasons we watch sports is to complain. Well, here are some completely irrelevant and completely annoying things about Syracuse basketball to fill the void.

I'm not positive when I started noticing it, but I think it was around Billy Celuck's 2000 season as our starting center. "We got a 7'1" motherf*cker jumping tip and we still can't win the ball?" And it seemed to continue. From Hakim Warrick to Darryl Watkins to Rick Jackson to Fab Melo to now Rakeem Christmas. Every season, in virtually every game we play (save a stray UConn or whomever), we have both superior height and athleticism at the center circle...and still seem to lose every opening tip. I say seem because I honestly have no clue if that's true or just my own anecdotal observation. But it drives me nuts for the entirety of the first possession of the game (that we DON'T HAVE) before I've quickly forgotten about it. Til the next game. Of course, it's completely irrelevant and affects the final score 0.00001%. Good thing basketball doesn't have lacrosse face-off rules. 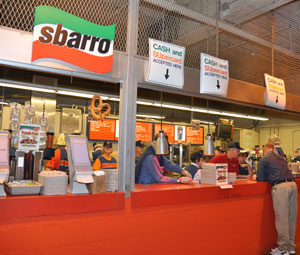 I'll concede you the Nachos Grande, a flawless serving of BOTH nuclear orange cheese and chunky salsa (plus gratis jalapenos), perfectly proportioned to a generous heaping of corn chips allowing one to not even need to be judicious with each dip. But, the rest of the Dome concessions really stink. Sure, you have the Hoffman's Dome Dog which is fine, but the pretzels look like Germanic prop food, the popcorn tastes like Tully's floor sweepings, and the chicken fingers seem to be battered with spackle. When it comes to the franchise spots it's even worse. A Burger King not even fit for a bus depot. Sbarro's "super slices" that look like a Ragu covered sponge. And let's not pretend that "Brew and BBQ" is some sort of nationally-recognized chain. With such poor offerings, the only choice is to eat beforehand, or stick to snacking on the liquidized white bread known as Labatt Blue.

Welcome to the Bumble

From its iconic opening guitar riff, you know...banality is about to go down. "Welcome to the jungle, we got fun and games..." I'm not sure who noticed we do indeed have "fun" (#ActionintheLane) and "games" (basketball, der) at "the jungle" (The Dome baby!), but I'd wager it was a young Mr. Excitement Michael Veley who decided this Guns N' Rose ditty would be the perfect song to open up hoops affairs. 25 years later, we're still using it. Some people in the public address office must think this 1987 Billboard #7 hit is akin to the Jordan-era Bulls' "Sirius," or even the badassery of "Enter Sandman" booming as Rivera walks to the mound. But it's not. Slash and Axl seem as ancient as Beethoven and Bach to our 90s-born players, and someone needs to tell Central New York that Pandora exists and we can discover new intro songs. 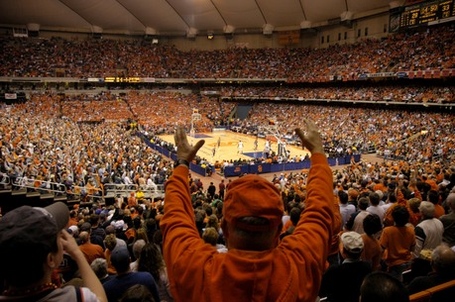 It's a Dome tradition. No, not clapping til the first made bucket (which was actually stolen from New Mexico's The Pit), but sitting down mere mili-seconds after the ball touches the net. In fact, I've never seen CNY denizens move as fast as they do after that first made field-goal, not even when angling for free bags of Doritos at pregame mixers. And if a lengthy scoreless drought to start the game goes on too long, you've never seen such complaining: "Jesus, Fran, this is almost...exercise." (After an ignominious 9:18 basketball start to the 1998 Providence game, several area ERs reported an uptick in patients complaining of The Clap Hand and Straightened Knee Dysfunction.) A part of me is surprised some enterprising upstater hasn't yet petitioned Mayor Stephanie A. Miner to allow foul shots to deactivate the standing clap. It's coming soon, believe me. NOW SIT DOWN SO I CAN SEE THIS 2-2 GAME!!!!

No Better Nickname for Michael Carter-Williams

Any time you have a take-charge point guard who completely dominates the ball, as a fan you're going to have to call his name out a lot. I realized this for the first time while yelling on the team at the Village Pourhouse during the Arkansas tilt and Michael Carter-Williams's near triple-double. "Michael Carter-Williams" doesn't exactly roll off the tongue. Any shortening is even worse. "Michael" sounds silly and "Mike" too familiar (like when wannabe actor friends call De Niro "Bobby"). Nor does "MCW" (em CEE double-you) even save you much syllabic time, though is great for print purposes. Oddly, I found myself in the heat of action continually referring to him as "Michael Carter," which both doesn't make any sense and makes me feel like he's the brother of that handsome guy that goes to Mars. We need a better spoken word nickname for this guy, because I lost my voice on Friday just saying his stupid hyphenate so much.

I don't know about you, but if I worked out for hours a day, turning my body into a marble statue, before parading my wares in front of cheering throngs, I'd probably wear as little clothes as possible. Then again, I'm an exhibitionist. Unlike a good portion of our players who sport Hanes beefy Ts under their jerseys like they're the fat kid at the public swimming pool. Is it chilly at court-level? Heck, between DaJuan Coleman's saggy undershirt, size XXXXL Bermuda shorts, and high-pulled socks, he looks like Payne Stewart ready to hit the links.

We Lack a Whipping Boy

I remember the good ol' days...those bad ol' days when we still had a bum or two in each recruiting class. Greg Davis, Sean Williams, Josh Wright, Louis McCroskey, there was always a marginally-skilled player forced to get a little burn and thus get yelled at by the Dome faithful every time they committed a boner. But now what? Now, in these halcyon days, the worst player we ever recruit is only a Jordan Brand All-American. No terrible players, no one to yell at. It would even be acceptable if a modesty-skilled player misbehaved off courst, causing Dome moralists to have a conniption ("He takes three-pointers early in the shot clock AND has tattoos! We hate him."). Instead we're forced to get kinda mad if a model citizen like Brandon Triche isn't being quite aggressive enough on his way to a solid 15 points and 5 boards en route to a rout. Having said that... 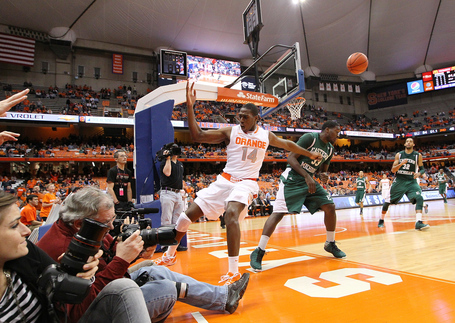 Our Walk-Ons Are Kinda Awful

I know what you're saying: that's not nice. They work hard, thanklessly show up to practice every day, allow GMac to still pretend he's on the team during warmup drills. They also get free Nike swag, ready-made Twitter avatars, and easy intercourse with Southerland's rejects. In past seasons we've had some truly skilled non-scholarshippers. Guys like Rob McClanaghan, Ronneil Herron, Justin Thomas, Jake Presutti, and even trophy-hog Brandon Reese. These were players you could tell could have gotten a scholarship to a crummier school like Providence or Georgetown if they hadn't so felt the siren's call of the Hill. These were players you wouldn't have even been that scared to have fill in in a pinch (Thomas actually played in the 6 OT game). But this year's crew comes out on court and it looks like a Mexican fire drill--Chinese fire drill? What is the semi-racist term I'm looking for?--barely able to get the ball over half-court and totally botching valuable #TacoTime opportunities. I don't want to say it, but I'll say it: I think I could beat some of them in basketball.

But what current Cuse irrelevancies are annoying you?

You come to Syracuse and you spend the summer before your freshman season losing your high school baby fat. How many times have we heard of a player forced to put aside the Big Macs in order to have the chiseled body necessary for the Big East? So you become hungry. Dion Waiters filled the hunger pangs with an equal dose of humbleness. But this year's rookie squad is so far doing it by garnering the CNY masses some Grade D ground beef carelessly dumped inside a federally-subsidized corn shell. Rookie DaJuan Coleman netted it this week against EMU, then immediately checked out of the game to become the first player to redeem his #TacoTime before the contest had even finished. #FatJoke

Aaron Goldfarb is the author of How to Fail: The Self-Hurt Guide and The Cheat Sheet (autographed copies available for the holidays). Syracuse basketball is the only thing he would ever write about for free. Send questions, thoughts, and/or walk-on apologist rants to aaron@aarongoldfarb.com or @aarongoldfarb