Pinstripe Bowl: Yes, The Schwartzwalder Trophy Should Be On The Line And That's That

Share All sharing options for: Pinstripe Bowl: Yes, The Schwartzwalder Trophy Should Be On The Line And That's That

For some reason, and I suppose it's because I was a child of the 80's and early 90's, all my initial metaphors usually involve professional wrestling. More often than not, Mike Rotunda is involved.

So when we learned that it was official, that the Syracuse Orange would be taking on the West Virginia Mountaineers in the 2012 Pinstripe Bowl on December 29th, I immediately started thinking about The Schwartzwalder Trophy, why Syracuse needed to put it on the line and how I could put it into wrestling terms in my head.

With two trophies (Schwartz & Pinstripe), would this be like one of those matches where the Hardcore Title and the Intercontinental Title were both on the line? That seemed to give the Pinstripe Bowl Trophy way too much credit.

I was stuck, and thankfully, Kevin here stepped up and delivered the perfect analogy:

YAIS! So perfect. A Syracuse-West Virginia game where the Schwartzwalder Trophy wasn't on the line would be like a non-title bout involving a champion. You know going in there's going to be shenanigans and you know going in that the end will be frustrating. Had only the title been on the line, we could have gotten closure. But noooooo... 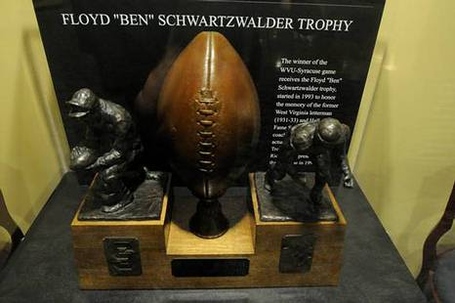 I'll be honest, I'm a little surprised to see so many Syracuse fans say the Schwartzwalder shouldn't be up for grabs. If it comes out that SU decides not to put the trophy on the table, I'd be shocked and disappointed in my school. Not sure why you wouldn't, too.

But We're Already Playing For The Pinstripe Bowl Trophy

Great. That's wonderful. Good for us.

Of course, there's that little part where no one gives a crap about the Pinstripe Bowl Trophy, but, there you go. 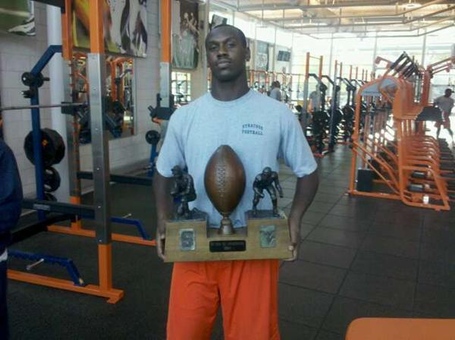 Save It For Our Regular Season Rivalry Games

If you save the Schwartzwalder Trophy for the next regular-season game between these two schools, you're going to be waiting a very, very long time.

If The Shoe Were On The Other Foot...

Look, you know how I know the Schwartzwalder Trophy should be on the line? Because if the roles were reversed and WVU had ownership of the trophy and then decided not to put the trophy on the line in this game, we'd call them the biggest cowards on the planet and we'd never let them forget about how they p***ied out.

And I'd say the same about us if we do it.

Theeeeeeee Orange Are In! Syracuse Will Play West Virginia In 2012 Pinstripe Bowl