This post is sponsored by All Star Sports Cards, who is still hosting a prediction contest before every Syracuse game this season. Cast your vote for the score of this game at their store and you'll be entered to win this stunning, sexy TNIAAM T-Shirt. Depending on the game, there's only a handful of entries so your odds of winning the shirt are pretty good.

And while you're there, make sure you mention TNIAAM during any purchase and you'll get 10% off! 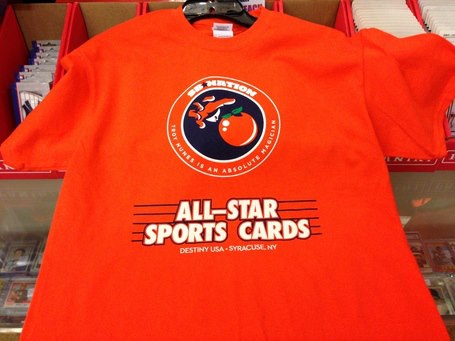 Announcers: Whoever They Usually Get

Alcorn's Last Game: The Alcorn St. Braves got beat up by Canisius, 87-74. Also worth noting that they lost to Temple by 17 a few weeks back.

Last Game: The last time these two teams played, a Rautins was in the lineup. Leo Rautins. Syracuse beat Alcorn St. 110-77 in 1982.

Alcorn Last Year: The Braves finished 10-20 last season. Not much to speak of.

Alcorn Coach: Luther Riley is in his second season at the helm. He's got a 12-32 record so far, so, he's got a ways to go to catch Boeheim.

"Fear Me, I've Killed Hundreds Of Timelords": Marquiz Baker is coming off a 30-point performance and is averaging 25.7 per game. Let's put a hand in his face.

Fun Fact: Check out the current standings of Alcorn's conference, the SWAC... 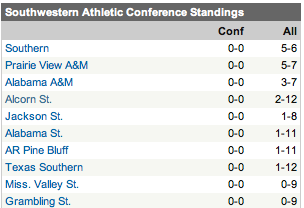 I'm starting to worry they might only get one NCAA bid this year, guys.

Exciting Reason To Watch: Jim Boeheim has the chance to move to 901 wins all-time, one behind Bobby Knight. That's worth your time!