14 high school football players have given their verbal commitment to play football for the Syracuse Orange in 2013. Wednesday, some of them put pen to paper and made it binding.

14 high school football players have given their verbal commitment to play football for the Syracuse Orange in 2013. Wednesday, some of them put pen to paper and made it binding.

First and foremost, QB Zach Allen. The Elite 11 quarterback from Temple, Texas never wavered since saying he'd come north to be SU's future gunslinger. And he followed through on Wednesday.

Does Zach expect to start for the Orange next season?

I’ve talked to the coaching staff a lot – before I committed, when I committed and after I committed – about the depth chart. That’s one of the main reasons I did commit to Syracuse, because I wanted to go someplace that I might have a chance to play at an early age. With Syracuse, it was really a great opportunity.

They have really good quarterbacks there right now, with Charley (Loeb), Terrel (Hunt) and John (Kinder). Like I said, it’s just going to be a competition. Whoever wants it the most, whoever makes the best decisions is going to get in.

Next up, recent commitment Luke Arciniega also made it official...

Signed my letter of intent. Happy to be a part Syracuse University and there football team. #CuseNation

Next up, OL John "Don't Call Me Jonny" Miller:

JUCO OL John Miller has signed his letter of intent to play for Syracuse.

Finally, there's Josh Kirkland, whom CuseNation says signed his LOI. Once you get the Christmas visit from Marrone Claus, it's hard to do otherwise... 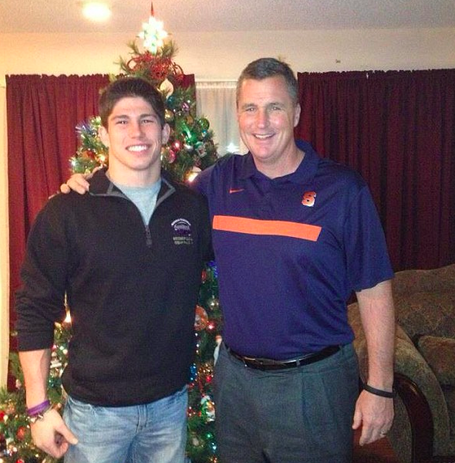