Time for your weekly edition of It's Taco Time in the Salt City! "Boomshakalaka!" What Cuse twosome reigns video game supreme?

In 1993 a game came along that wasn't based on sound ball movement, taking quality shots, and "fundamentals"--you know, boring shit old people like. Instead, the only concern was "fast, action-packed gameplay," "exaggerated realism," and the truly cool things about basketball: blazing speed, rim-rocking dunks, quasi-goaltended rejections, and chucked-up three-pointers. Of course I'm talking about NBA Jam, Midway's billion dollar-earning arcade game. And, after an off-hand remark in last week's column, I started wondering...who would win the Syracuse NBA Jam two-on-two tournament?

1. Only one pair of teammates per season.
2. Players are only as "good" as they were that specific year.
3. Players can only be used once (i.e. Billy Celuck can't pair with Greg Davis in 2001 and then Ethan Cole in 2002)

#16 - Vic Hanson/Charlie Lee (1926) -- Grantland Rice called Hanson "the best all-around athlete Syracuse ever had." Grantland Rice was alive when children hit hoops with a stick for fun. 5'10" Hanson couldn't dunk on a Nerf rim and died before three pointers were invented. Lee, a "guard/center," and his underhand set shot ain't gonna set the world on fire either. This team would probably get shut out even if you were playing the CPU on "rookie."

#15 - Roosevelt Bouie/Louis Orr (1980) -- The Louie and Bouie Show brought to Jam would be the Clanking and Bricking Show as neither man could hit a three to save their lives. That 0-2 zone won't stop any opposition threes either.

#14 - "Kid" Kohls/Dennis "Sweet D" DuVal (1973) -- The top nicknamed pairing gives announcer Tim Kitzrow a stiffy as they shoot lights out, but future Washington General Kohls is treated like one by high-flying opponents not forced to play in Chuck Taylors.

#13 - Vinnie Cohen/Gary Clark (1957) -- Cohen--not a Jew, though he did become a lawyer--was a scoring machine years ahead of his time. Which makes him about as good as a player from the 1970s, back when NBA Stuff Shot was played on a punch-card computer the size of Manley Field House.

#12 - Pearl Washington/Rafael Addison (1986) -- The Pearl may have built the Big East, but he himself was built for an Atari world. With little speed, leaping ability, or the prowess to hit long range bombs, Dwayne would only be worthwhile if you were playing a thrilling game of NBA Layup.

#11 - Dion Waiters/Fab Melo (2012) -- Dion Waiters is like a video game player come to life. And not just because he spent his first pro check on having a smartphone surgically implanted into his body so he can check his Twitter interactions even while his hands are busy. Meanwhile, foreigners were awesome on the original Jam (see: Petrovic, Drazen; Schrempf, Detlef), and I bet de Melo would be so much better than he deserved to be, especially since bone-headed goaltends are actually encouraged.

#10 - Sherman Douglas/Stevie Thompson (1989) -- A fundamentally sound 1-1 zone stops no one, though The General's oops to Stevie break several backboards.

#9 - Hakim Warrick/Josh Pace (2005) -- It seems absurd to put the best dunker in Syracuse history so low, but one of the three from the great 2003 troika has to get screwed, and Warrick is the one who can't hit threes. (Had Warrick paired with Melo in 2003 or Gerry in 2005, I'd have seeded them #1 and #3 respectively.) Pace likewise is whatever the polar opposite of "He's on fire!" is from long range, so this team is going out much earlier than expected.

#8 - Etan Thomas/Preston Shumpert (2000) -- The best shot-blocker in Cuse history paired with one of our best three-point shooters. A totally vanilla and un-thrilling team only your nerdy neighbor would even choose to play with, but whom he would then fundamentally blow you out with.

#7 - Dave Bing/George Hicker (1966) -- NBA legend Dave Bing is disgusted at the thought of even having to sign off his likeness to Midway, but the "Blonde Bomber" uses the "Hicker Flicker" from deep to show young bucks that the old guys (who both think Super Mario is that pizzeria owner on Erie) can still ball.

#6 - MCW/Southerland (2013) This would easily be one of the most fun teams to play with and the one you'd always select. In fact, of any Cuse player all-time, Southerland most looks like a NBA Jam digitized man come to life, what with his wiry body and perma-smile, cartoonish dunks, and long, looping bombs. 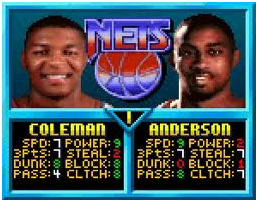 #5 - Derrick Coleman/Billy Owens (1990) -- The only former Syracuse player to appear in the 1993 Jam (aside from someone special we'll discuss in a second), you can see above that DC had lackluster statistical attributes and, by some basement dweller's estimation, is even one part of THE worst twosome in the game. Now while a DC/Billy Owens pairing in real life would almost certainly win a two-on-two tournament against all comers, their quality post moves, tenacious rebounding, and "power" hardly mean shit when arcaded up and lacking the ability to hit a three. I'd pick these two to win Barroom Jam though.

John Wallace/Lawrence Moten (1995) would surely be the best inside/out duo aside from our upcoming champion. 1995 was before Wallace was chucking threes, but he'll still provide plenty off dunking and blocking while Moten offers the trifectas.

Donte Greene/Johnny Flynn (2008) were near-perfect video game players. So much better in electronic life than in real. A lightening quick guard with good ball-swiping skills PLUS the ability to dunk on people's heads. An athletic big man who could step out and hit threes and also block the occasional shot. And neither young buck is going to lose stamina from you holding the turbo button down too long. This hot-dogging "selfish" pair may have never formed a Dynasty in real basketball, but they'd be an incredibly formidable Jam twosome and you f**king know it.

Wes Johnson/Andy Rautins (2010) are neither upper upper echelon Syracuse legends--though Wes is one of only four Big East Players of the Year--though combined you'd have a nearly unstoppable NBA Jam pairing. Wes, not only the third best dunker in Cuse history, but a 40% three point shooter. Andy, likewise 40+% from long range. Combined, statistically great defenders. Unless a moron is behind the NES controller or the arcade console, these two heady players cruise to the title game. 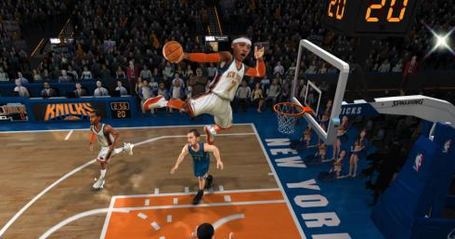 Carmelo Anthony/Gerry McNamara (2003) -- You don't have the best dunker (not by a long shot--though better than you recall), nor do you have anywhere close to--statistically--the best three point shooter (Gerry's career was worse than Eric Devendorf's percentage-wise). You have two modest athletes of average speed who ranged (in the common perception) from so-so to "doesn't give a damn" in the the defense department. OK, but what you do have are maybe the two greatest "he's on fire" players in Syracuse history. I don't think there's much question this fake video game twosome would outscore every other fake video game twosome in Orange lore. So say I. 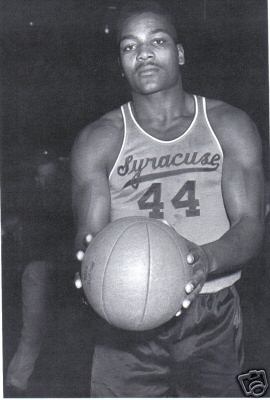 Up, Right, Down, Left, A, B and Jim Brown unlocked for use with Vinnie Cohen on the 1957 team.

A, Right, Down, B and the Deshaun Williams/Otto the Orange team is unlocked for gameplay.

Start, A, Start, B and Jon Hey's score replaced with one by another former Jam alum, DJ Rony Seikaly.

Special thanks to Orange Hoops which is an insanely valuable rabbit hole of a resource.

James Southerland won Big East honors this week, but he more notably finished a great game against Canisius with his first career taco dunk. Unfortunately, the so-called "great" James Arthur Boeheim totally screwed Southerland's chances at an unprecedented weekly double by pulling him out for an early curtain call against Detroit. Embarrassingly, when the levees broke and Detroit nearly pulled an epic comeback, JB had to bring James back into the game to stem the tide, the first time I've ever seen a curtain call-back. Sadly, even with a second chance, James was unable to garner the righteously indignated, Gottlieb-@'ing, comment section defending, CNY masses some Grade D ground beef carelessly dumped inside a federally-subsidized corn shell.

Aaron Goldfarb is the author of How to Fail: The Self-Hurt Guide and The Cheat Sheet. Syracuse basketball is the only thing he would ever write about for free. Send questions or thoughts to aaron@aarongoldfarb.com or @aarongoldfarbvid