Syracuse survived a furious Detroit comeback to pick up their 10th win of the season and Jim Boeheim's 900th all-time.

Share All sharing options for: Syracuse 72 - Detroit 68: Jim Boeheim Gets 900 As Orange Get Scare

With something like 8-9 minutes left in the Syracuse Orange game Monday night, Carrier Dome officials handed out Jim Boeheim Heads on a stick that unofficially marked the beginning of the Jim Boeheim 900-win celebration. As if they knew it was happening, the Detroit Titans seemed to decide in that moment that they were no sacrificial lamb. Taking advantage of SU's lax play, they stormed back into the game, erasing a 21-point deficit with huge three-pointers and thunderous dunks. They came up just a little short on time and points and the Orange survived, 72-68, to give Boeheim that long-awaited 900th career victory.

Boeheim joins an elite group of coaches with 900 Division 1 victories and he's the first one to do it at one school. He'll surpass Bob Knight (902) soon enough and keep marching towards 1,000. Given his pace, recruiting classes and sense that he's not retiring anytime soon, he might get there sooner than later.

As for the Orange, they almost turned this night of honors into a night of embarrassments. James Southerland once again carried the team behind a 22-point performance. Just like the Arkansas game, the Orange might have lost this game without him.

Michael Carter-Williams had a lot of great things (12 points, 10 assists) and some bad things (five TOs). However, his clutch free-throw shooting in the final seconds sealed the deal for SU.

Jeremy Ryan will have some in-depth recaps and post-game presser notes shortly. In the meantime, enjoy the victory and appreciate we've got Jim Boeheim here to lead us to it. 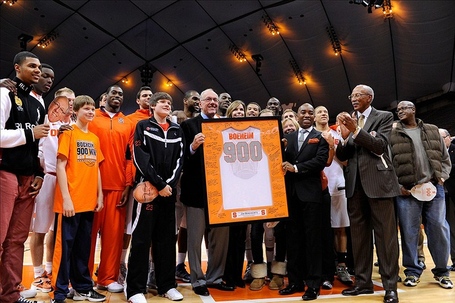