Time for your weekly edition of It's Taco Time in the Salt City! Lights, butter, Wegmans...what are the worst ways for an Orange fan to propose?

A friend of mine got engaged this weekend. He presented his girlfriend with a ring during a Saturday afternoon game of Orange-opoly. She's not even a Syracuse grad. Or fan. That got me thinking, what are the worst Syracuse ways to get engaged?

It's the part of going to the Carrier Dome that always leads to curiosity and then quick revulsion. No, I'm not referring to the Sbarro's "superslice." I'm of course talking about Kiss Cam. The once-a-game scoreboard broadcast of asexual blobs mashing their double chins together. Aside from, uh, #TacoTime, there's no guiltier pleasure during a hoops contest, and surely no triter way to tell the woman you settled for, let's make this official. Your would-be wife will always cherish recounting to friends (and her therapist) how you got down on one knee in front of 30,000 drunks hollering "Stickyer tongue downer throat!" 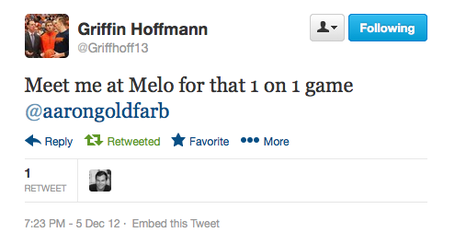 Walk-on Down the Aisle

Walk-on sex symbol Griffin Hoffman challenges you to a pick-up game over Twitter. It seems innocuous enough, so you accept. Only when you arrive at "Melo," though, do you realize you've been tricked. Where's Griffin? Why is Albert Nassar in a tuxedo? And what's Rabbi Danny Schayes doing here?! You've been gotcha'ed into appearing in the pilot episode of Time Warner Sports's new reality gameshow Walk-on Down the Aisle. With an orange chuppah nearby--we're all Jews here (I think)--you must defeat Griffin in a game to 11, lest he be allowed to propose to your eager girlfriend right then and there. Mazel tov?

Lights on the Lack

Nothing says "romance is in the air," like driving your piece of shit Subaru in neutral around the most polluted body of water on planet earth. Yet for 23 years, such has been the case at Lights on the Lake, "CNY's #1 holiday attraction" (show your Wegmans Shoppers Club Card for $4 off on Mondays and Tuesdays). As motorcoaches from local nursing homes slowly roll by gushing over cheeseball lighting schemes and the fumes of municipal waste waft through your tailpipe and back into the cabin, you point toward the personalized banner you've secretly purchased for $175:

Believe me, your Emily Elf would enjoy the Arthur Treacher's drive-thru so much more.

Speaking of Wegmans...you already use the the regional supermarket as your one-stop shop for deli meats, the freshest produce, and even fourteen-pound bags of Sour Patch Kids. So why not also use it to pop the question? Picture this: one Saturday night you escort your sweetheart to a fancy dinner in the food court where she's stunned to see her Danny's Favorite 14-incher squirted with a mayo'ed "Will You Marry Me?" As Glee reject and career omeleteer Alan warbles out "Chapel of Love," tears come to your girlfriend's eyes as she responds: "I think I'm gonna get some General Tso's at the Chinese food bar instead."

So you aren't thrilled with dropping two month's salary on a stupid bauble. I hear ya. Heck, you don't even have a job any more ever since you falsely imprisoned that dude at Lord & Taylor. Or perhaps you just Netflixed Blood Diamond and you're so not down with supporting the conflict in Sierra Leone. So be original for once. Don't get your girl a silly diamond ring. Get her Diamond's ring. As in former Syracuse legend Diamond Ferri. I'm sure if you troll ebay long enough, Diamond will auction off one of the two Grey Cup rings he won as a member of the Montreal Alouettes. Imagine the Facebook "likes" your gal will get when she shows her finger supporting that gold-plated beauty! The only conflict with this marriage is going to be debating whether to wear home or road jerseys when you walk down the aisle. 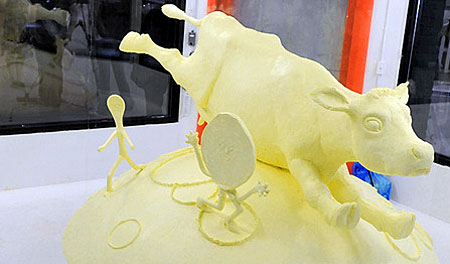 With arms locked like two stuck-together onion rings, you and your paramour stroll through the Pride of New York Marketplace, you use all your willpower to pass on a funnel cake, you even ignore a Hall & Oates cover band singing "Private Eyes" as bra-less women gyrate in a ghastly fashion. (Wait a sec, that's really Hall & Oates!) You finally reach your destination and enter The Dairy Building at the NYS Fair. There, your long-suffering girlfriend is stunned to find a local Dairy Council artisan has carved, in unsalted butter, a likeness of YOU down on a knee. She is so churned on. Her heart melts, and so does the spreadable ring once you get into a more heated part of the fairgrounds. With an engagement this clever, other people will soon be saying: "I Can't Believe It's Not a Successful Marriage."

You follow Michael Carter-Williams on Twitter, your girlfriend follows Dubz too, so why not use that to your romantic advantage? "hey @MJCWilliams how bout a RT for your #1 fan who is also @skankcuse's #1's fan. will u marry me?" A marriage proposal that only takes your thumb and about five seconds away from playing Angry Birds Star Wars on your iPhone? Classier than Mr. Excitement announcing the starting lineups.

(Note: I love that this bozo from Bozeman prevented MCW from getting @MCWilliams)

Troy Nunes is an Absolute Marriagician

You're a semi-regular Syracuse blogger obsessed with his stats. You're not quite ready to marry your girlfriend but with a blogged proposal, this column might go, say it with me, VIRAL. Hit the SB Nation front page. Imagine the pageviews! So with that, I ask my girlfriend...honey, will you please Like, Share, and ReTweet this shit? 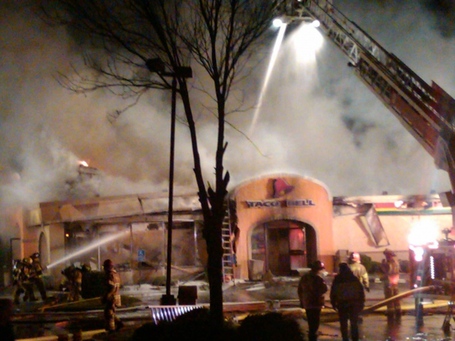 The freshman keep rolling, specifically Trevor Cooney who starts glowing red NBA Jam style when he has any sort of chance of garnering the CNY masses some Grade D ground beef carelessly dumped inside a federally-subsidized corn shell. He's on Fire (Sauce)!

Aaron Goldfarb is the author of How to Fail: The Self-Hurt Guide and The Cheat Sheet (autographed copies available for Jesus's Bday). Syracuse basketball is the only thing he would ever write about for free. Send questions, thoughts, and/or marriage proposals to aaron@aarongoldfarb.com or @aarongoldfarb