It's political out there today, you guys. Go vote for someone. Or don't. That's your right, I suppose. Then tell everyone about it. Or don't. Again, do what you want. If it feels good do it, that's my motto.

I'm not going to endorse anyone on a national level, or even a local government level. However, I am going to throw an endorsement out there for the most important office of all.

I wasn't going to back Kevin Belbey just because he's a manager for the Syracuse Orange basketball team. That didn't seem fair. And then he sent me this photo of Jim Boeheim with rapper Wale: 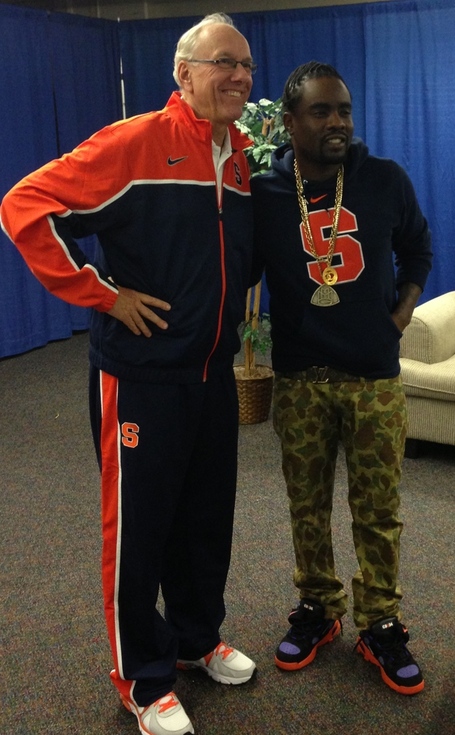 And with that, the contest was over. Kevin Belbey became the obvious choice.

I'm Kevin Belbey, senior Broadcast Journalism major at SU. The 'Cuse has really been the best four years of my life. It was my dream school...and it truly has been a dream ride. I've been pretty involved in my time here. CitrusTV, Z89 Radio, Newhouse Peer Adviser, helped revamp Midnight Madness. But my heart and soul have gone into being the Head Manager for the SU Men's Basketball Team. Nothing like being a part of something bigger than myself. If I could become Homecoming King, I'd continue to give back to the University by representing my senior class and making sure the final semester for the 2013 class is the best one they can possibly have.

If you're a Syracuse student, faculty or alumni with a NetID, you can vote for Homecoming King & Queen here. I don't have an endorsement for queen but if one of them sends me a cool photo of Jim Boeheim, I will be happy to back their vision.

And remember...ROCK THE VOTE! (Do we still Rock The Vote? Or do we Rap The Vote these days?) Whatever.