Louisville's win over Rutgers gives Syracuse a share of the Big East Conference crown. All Hail The Co-Kings!

Congratulation to the Louisville Cardinals, who did some great things Thursday night.

1. The beat the Rutgers Scarlet Knights 20-17 in front of a national TV audience.

2. They claimed a piece of the Big East crown and, in doing so, also ensured that the Syracuse Orange are co-Big East Champions to boot.

That's right, somehow, someway, your Syracuse football team is going out of the Big East as a partial champion of it. It's the first time since 2004 that SU has claimed a piece of the crown and, of course, it will be the last time.

A fantastic way for the Orange to go out of the Big East. It's a talking point that coaches that take to recruits and it's a nice line of Doug Marrone's resume.,

Speaking of Doug, he better be eating a f***ing amazing Dove Bar right now. Dude had to put up with all of our whining all season long and all he did was get bowl eligible and win a share of the conference title.

Good work everyone...even though we didn't actually do anything. I'm sure there's a t-shirt on its way to your inbox right now...

Update: Kudos to Tom for the savvy investment... 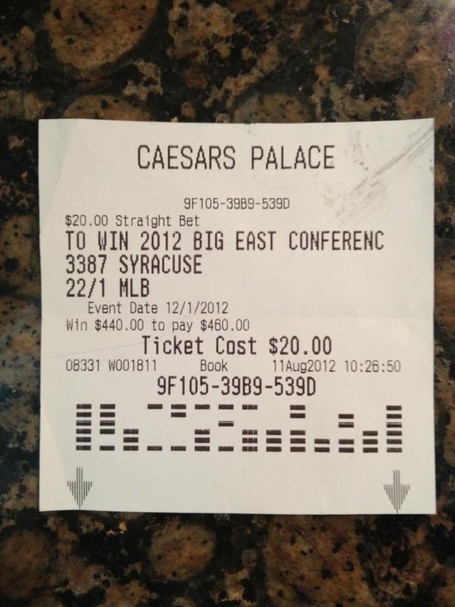