Win or lose, the Quest-O-Meter would not have changed this week. However, the Syracuse Orange did win, and that's way better than the alternative.

Win or lose, the Quest-O-Meter would not have changed this week. However, the Syracuse Orange did win, and that's way better than the alternative. 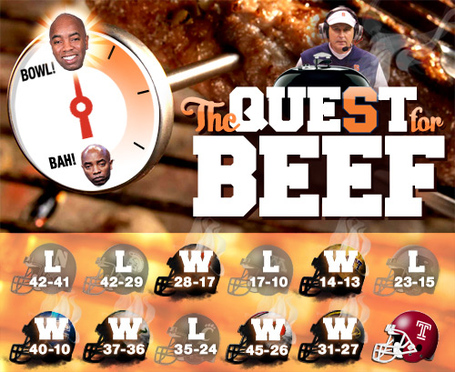 Now the bad news is that the Beef O'Brady Bowl is almost certainly off the table. As discussed last week, chances are there won't be enough teams for a Big East school to play for Beef, and even if there is, Syracuse will be picked long before then.

And so, we have a couple things to discuss. Let's begin. 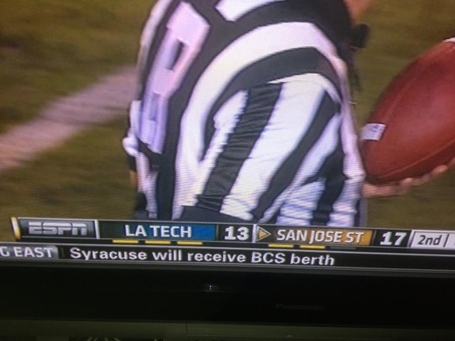 Does Syracuse really have a shot at playing in the Big East's BCS Bowl?

Mathematically, yes. In reality, no.

In order for Syracuse to gain the BCS bid, Louisville would have to beat Rutgers and Syracuse would then have to magically jump up 25 spots in the BCS Poll despite not playing a game.

It's not going to happen. It's a nice thought, but, no. That said, if Louisville does beat Rutgers, we do get a piece of the Big East Conference title, so that's fun! Nice way to go out and splitting conference crown three or four-was is just so very Big East.

Should I be pissed off about how we should have beaten Rutgers and, if we had, we'd be a lock for the BCS Bowl?

No. The problem with all this "mathematical chance" stuff is that it immediately makes you look back and see what you could have done differently. And it's very easy to look back on this Syracuse season and see mistakes that could have been avoided.

All of a sudden, instead of looking at a mistake-prone team that started 1-3 and fought it's way back against the odds to finish 7-5, you're feeling disappointed about how this team "should" be 10-2.

Woulda, coulda, shoulda. Be happy that we're 7-5 and proved we're one of the best teams in the conference. Be proud of where this team finished. Be pleased with the progress the program is making. Don't get caught up in the what-could-have-beens. Every season is full of them, this one is no different.

Is there a way we can get locked in to the Russell Athletic Bowl?

No. After the BCS team is selected, the rest of the bowls have no requirement to take the next team in line. No matter how things shake out, I just can't see a bowl game in Orlando picking us over Rutgers, Louisville and Cincinnati, all of whom have better records than us.

Is there a chance the Belk Bowl could take us?

Sure. It wouldn't be the greatest shock in the world. But again, thinking about ticket sales, would they really take us over a Cincinnati team with a better record and a win over us? Seems unlikely.

So it sounds like we're almost certainly going to end up in the Pinstripe Bowl, right?

Right. It's not a 100% thing but, come on, the Pinstripe Bowl will always want a local team. Rutgers is going to be gone by then and that leaves us. I'd say we did a pretty good job packing the place last time so there shouldn't be any reason they wouldn't take us with the fourth pick.

Alright so who are we playing?

Smart money has been on West Virginia for a few weeks now. CBS Sports has us both in the Pinstripe at the moment as well. The only problem at this point is that the 'Eers might be about to play themselves into a better bowl.

They beat Iowa State this weekend and they've got 1-10 Kansas next week. By all accounts, they'll finish 7-5 which will be the same record as Texas Tech and TCU (assuming they lose to Oklahoma). Keep in mind both Texas schools beat WVU.

Working in our favor is the fact that most of the bowl games directly ahead of the Pinstripe in the Big 12 pecking order take place out West. Holiday Bowl (San Diego) and Meineke Car Care Bowl (Houston) will probably prefer TCU and Texas Tech over WVU, leaving the Pinstripe Bowl to choose between the Mountaineers and Baylor. Given the potential of a West Virginia - Syracuse match-up, they'd be idiots not to go that route.

So I think it's fair to expect to see our old friends one more time, but don't close the door on TCU, Texas Tech or Baylor just yet.