Looking around at the current state of college athletics and conference realignment, I found a lot of similarities between it and the world of home entertainment.

Share All sharing options for: How The Home Entertainment Industry Explains Conference Realignment

As someone who used to work in the home entertainment industry (not in the way you're thinking, perv), I've long had a fascination with the way we consume entertainment and how that market has changed over the years. Look at how quickly we went from DVD to Blu-Ray to Streaming video. Compared to the time it took to go through VHS, it's moving at warp speed and it's only getting warper (not a word).

I was walking my dog last night and, for reasons only my therapist can explain, I started thinking about Blockbuster Video (remember them!?!). It wasn't that long ago that Blockbuster ruled everything and anything that had to do with home entertainment. Then everything changed and they were done. Within a decade, they went from top of the food chain to not even being on the food chain. You could even argue their food chain is barely still relevant.

I started thinking about how the home entertainment industry shares a lot of similarities with the current state of college athletics. As conference realignment changes the business model and the business model in turn changes conferences, it all clicked. And naturally, that led me to start wondering which companies matched up with which conferences.

I remember a time when Blockbusters were like Starbucks. Turn a couple corners and you're bound to run into another one. Sure there was Hollywood Video and local mom & pops like RST Video, but Blockbuster owned the market. There were 3,400 stores in 1993 and college football fans will "never" forget the Blockbuster Bowl. So long as human beings needed to get in their car and drive to a video store to rent a VHS or DVD, they were kings.

Then, the model changed. Netflix came along and gave people a different option. Competitors figured out that you could offer monthly unlimited rental models to out-do Blockbuster. Things like online streaming were in their infancy, but it started to creep in.

All the while, Blockbuster seemed to push back. Instead of adjusting to changing technologies and consumer preferences, they dug in. They tried to bully Netflix out by demanding exclusives from movie studios. When they wasn't enough, they tried and failed to out-Netflix Netflix. In the end, it was all too little, too late. 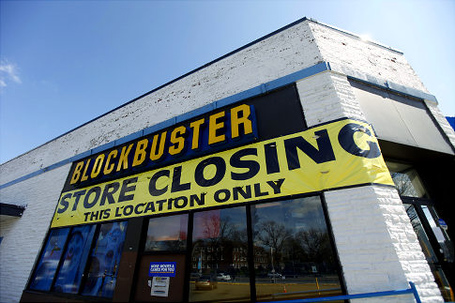 Blockbuster became a dinosaur. The market changed and the market left them behind. Because that's what markets do. They demand adaptation (See: MP3s). They do not suffer fools who try to hold on to the business model that worked ten years ago. Those companies are doomed and Blockbuster has become a textbook example of a company that was too big and too stubborn to change when it needed to most.

Excuse me for going Chandler Bing on you, but, could that BE any more Big East?

Netflix came along at the right time and became a shining example of a company thinking about the future in a time when so many other companies in the industry were clinging to what had worked in years past. Lean and mean, their subscription-based service was one of those forward-thinking ideas that might seem common sense now but felt revolutionary at the time.

Later on, they stepped into the online streaming business and helped shape that industry, as well. Their business model butted heads with retailers, whom the movie studios covet most, but they've survived multiple attempts by the big boys to devalue the company.

Netflix seems like the kind of company that is adaptable enough to change and evolve when needed to survive.

And yet...one gets the sense that Netflix is always one major market shift away from completely collapsing.

Take their ill-advised decision to split off their DVD service and call it Qwikster. The move was derided and hated and eventually scraped. In retrospect, it made you wonder what the hell they were thinking.

And it always seems like Netflix is at the mercy of others more than it's in control of it's own destiny. Movie studios limit the selection available on Netflix Instant, making it 10% awesome content and 90% rubbish. Retailers like Wal-Mart and Target demand exclusives and window push-back for Netflix so they can make more money.

Netflix is probably going to be around for a while since it seems capable of adapting when needed. Then again, all it might take is one them-or-us decision from a bigger fish to knock them off their pedestal once and for all.

Innovators since day one, Amazon succeeds because it's laid such an amazing amount of groundwork, it always seems to have success no matter what the changes in the market or consumer tastes. It's days of being a trend-setter are probably over but what it lacks in panache it more than makes up for in breadth, strength and the ability to offer everyone exactly what they want.

They've expanded in all the right directions and they've mostly kept their eye on the prize the entire time. They realize that this is a money game so they're always thinking about new ways to package deals, give you more for your dollar and make an extra dollar while they're at it.

Maybe they're not the coolest company anymore but when you want something, you know that you'll find it on Amazon. And when it comes to home entertainment, you'll find every conceivable option here. They'll out-option anyone. You want a DVD? Got it. You want a Blu-Ray? Got that too. Want to stream a TV show that was on last night? $1.99...BOOM! Try doing that, Netflix...oh...right...you can't.

They're great because they're dependable and they offer you the total package. And, of course, they're everywhere.

When you think of Wal-Mart, you probably think of rural locations populated with dead-eyed hicks walking around with their broods of failure trudging behind them (copyright: Patton Oswalt), eating sugary cereal and yelling something about NASCAR.

On paper, there's nothing appealing and sexy about that.

And yet, they are the most powerful retail company in the nation.

I've heard war stories from home entertainment salespeople on what it's like to sell to Wal-Mart. Basically, you show up in their buying HQ in rural Arkansas (and I mean RURAL Arkansas). It's you and salespeople from all the other movie studios. They send each of you into a tiny room where you have 15-20 minutes to set up your displays and make your product look all nice. Then the buyer comes in, you've got about 5-10 minutes to give your schpiel, they peruse your wares and that's it. A few days later you find out if you made your yearly bonus or if you're fired.

They're not always fair. They treat their employees like crap. They treat the companies that stock their shelves even worse. They ruin small towns and local economies just by showing up.

And yet...you keep shopping there. No matter what, you're there with you're entire family. They openly dare you to shop elsewhere and you don't even flinch. Because at the end of the day, there's no better deal in America. 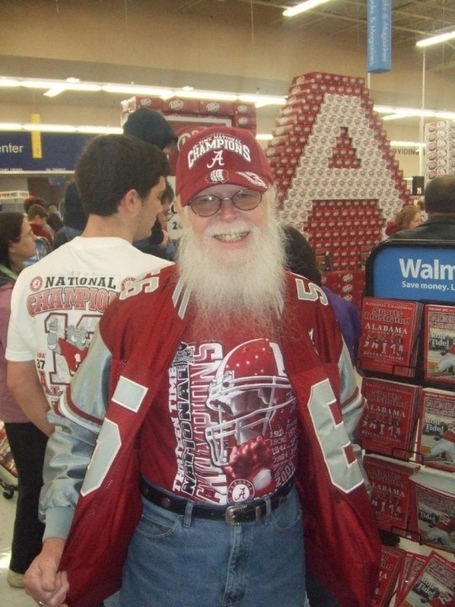 I remember the first time I heard of RedBox, I though to myself that there's no way this was going to last. It looks to chintzy. The selection is crap. It's only found in front of shady 7-11s in sketchy neighborhoods.

Seven or eight years later, RedBox is kinda kicking ass. They're still found in front of a lot of sketchy 7-11s but they're also found inside supermarkets and other reasonable locations.

And I became a customer myself once I discovered that the selection, while not great, isn't all that terrible either. You can often find some pretty solid movies and the price is right for a one-night rental when nothing looks good on Netflix. It's the best of all worlds...cheap, easy to use and decent selection.

On paper, it shouldn't work. One of the bigger boys should have wiped them out by now. And yet they persist...and might just end up out-doing many of them in the process.

Keep an eye out for the Next Big Thing. It's probably going to come out of Japan or Korea. Some kind of revolutionary way to consume home entertainment, like a Roku Slingbox iPad thingy connected directly to your ocular cavity with unlimited selection all for $4.99/month. Something you can barely wrap your head around today but will be commonplace in five years.

I can't tell you what, exactly, is coming, but it's big, and it's going to change the industry. Things are a little too quiet and the people in charge are a little too smart for anything otherwise. Looking around the at the current state of college athletics and conference realignment, I found a lot of similarities between it and the world of home entertainment. 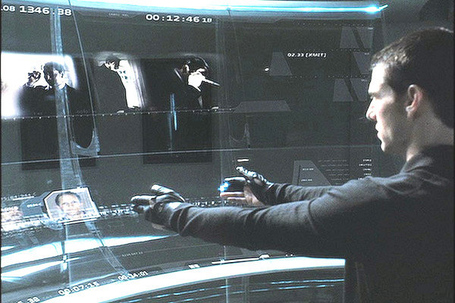