In What Other Gimmicky Venues Could Syracuse Play Future Games?

Time for another installment of It's Taco Time in the Salt City -- riverboat casinos, Thornden Park, peach buckets...what other gimmicks would be fun for Syracuse basketball to participate in?

Share All sharing options for: In What Other Gimmicky Venues Could Syracuse Play Future Games?

I'm a Bill Veeck type. I love gimmicky shit. Hockey on baseball fields. College football in Ireland. 3'7" midgets sent to the plate to eke out a cheap walk. After three decades of watching sports, I grow a little bored unless some enterprising muckety muck decides to try something fresh. (Plus, I'm always in favor of anything that gets old fussbuckets pissed off, which is the main reason I like Oregon's swag, Boise State's field, and performance enhancing drugs. Forget Lance Armstrong, I'm still counting Floyd Landis's Tour win. #FloydStrong) So, of course, I was amped for the Battle on the Midway. Until I watched it. And then, I too joined the crotchety, nofunnik masses (and that hot yoga-loving twerp Thamel), in declaring that this charade of airballs, bricks, and JB in Blu Blockers should have never occurred.

But that doesn't mean we need to go back to boring hoops contests in: "sports arenas." Oh no, I have several ideas for what our next gimmicky game can be--and how Syracuse might fare in such a contest.

Honoring our military with lackluster, early-season basketball is noble and all, but there's got to be a better way to do it than by playing on a floating museum. Not to mention, I'm tired of seeing sports broadcasts cut away to soldiers watching a game they're only marginally interested in, from some army base in God knows where, on what you just know is a crummy satellite feed on a small tube monitor, simply waiting for Dick Enberg to salute the "men and women" so they can pretend to be excited for that one second they're on TV. And, I thought we did away with war-time torture?! Instead, I say, let's literally bring a game to them. Remember in Apocalypse Now! when the Playmates are helicoptered into Vietnam? We'll do likewise with a basketball game, landing in Korangal Valley, Afghanistan a minute before tip-off, and choppering out a minute after. We could probably even get some hacky USO comic like Jeff Dunham to act as referee, hopefully with his ventriloquist dummy in tow.

How Cuse would fare: JB loves the smell of napalm in the morning. And, Baye Keita was clearly once a child soldier as he still wields his hands like jungle machetes. Easy victory over Army 81-65, whose own soldiers taunt their players for opting to hoop it up instead of fighting in a war. Hilarious "how this is actually a home game" jokes prevail.

Of all the bitching about the Battle, I didn't hear one person complain about the most boat-like potential negative of the Midway--uh, rocking and stuff--people only complained about wind and glare. So let's piggyback on an idea that still has legs and just play a game on a better boat. As in, a riverboat casino. Played inside the scummy Midnight Rambler Riverboat departing from Freeport, NY, and held three miles out in international waters, this pre-season classic will feature live in-arena gambling (much like a cock fight), croupiers in tuxedos as officials (still better than Burr), and a free watered-down cocktail with each foul shot attempt. "Freshen your Scotch and soda, Mr. Triche?" Indeed.

How Cuse would fare: With JB's Olympic experience, he's used to vanquishing opponents in an international setting. Youth helps us as the underaged Michael Carter-Williams and Rak Christmas aren't allowed to drink during the game, leading us to victory over a shit-canned veteran squad from Michigan, 75-35. Hopkins wins a bundle at the slots.

I couldn't believe how cowardly San Diego State was being with just a slight chill in the air. Their players wore long sleeves and Steve Fisher had a shawl on like Whistler's Mother. Meanwhile, we all know up in Syracuse, people bust out their cargo shorts on the first 40 degree April day. We already get zinged by hilarious pundits for our love of home court advantage, so why not make it even more advantageous? For the New Year's day Destiny in Winter Classic, the far parking lot of the Destiny USA mall, right next to the Dick's Sporting Goods, will have a court spray painted on and adjustable basketball hoops wheeled over from...uh, sponsor Dick's Sporting Goods. Bonus: no concession stand, so fans can instead hit the food court for a quick half-time pot of fondue from the Melting Pot, or an adult beverage at Toby Keith's I Love This Bar and Grill.

How Cuse would fare: With DaJuan Coleman rendered virtually unguardable in a puffy North Face jacket and Timberlands, Syracuse cruises to an easy victory over Arizona State, 100-12, the lake effect snow from Onondaga kissing the gravelly court throughout the entire two hour contest. Dick Enberg dies of hypothermia, chuckling about how he's "Never had to worry about frostbite while announcing before" even down to his last breaths. 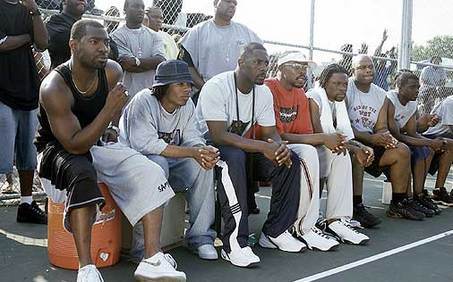 Carver and Herc would immediately know something is amiss when they went to visit the Bill Rapp Superstore on Burnet Ave, only to find it a ghost town. Not a single $99 Nissan Sentra lease special to be found. Driving past Fred Grimaldi's Chop House, the parking lot is likewise empty, absent the standard half-dozen decades-old Cadillacs. After following the strong scent of garlic and aged provolone, and a tip from Sydnor, they arrive at a jam-packed Thornden Park. There, they see "Proposition" Rapp flanked by his team of used car salesmen in double breasted Charney's suits, across the court "Stringer" Grimaldi alongside a crew looking like extras from a Sopranos parody. It's the annual Eastside/Westside Classic, pitting Rapp's westside ballers against Grimaldi's eastside squad, with a few "ringers" you might recognize if you're an Orange fan. Of course, this game isn't nationally televised because these two guys aren't technically allowed within a five mile radius of a Syracuse student athlete.

How Cuse would fare: Once the kings of Central New York, Rapp and Grimaldi's empires have been eclipsed by the likes of Billy Fuccillo and Danny Wegman. In fact, this game may have been played for a seven-figure wager in the early '90s, providing Syracuse cagers with enough pocket money to get them through the cold winter months. Today, the stakes are much more modest. If Grimaldi wins, he gets a badly needed transmission repair. If Rapp wins, he takes Grimaldi's $1 Manlius house. And, as per the pre-arranged rules, Doctor Gross is forced to throw a Hamsterdam-style post-game block party for both crews.

This gimmick is for the old-timers who think the "purity" of sport became corrupted the moment face-masks got a second bar and that Muslim Lew Alcindor was allowed to jam. Played inside the ballroom of the Best Western Plus on Carrier Circle, uncut peach baskets hang at both ends, it's call your own fouls (creating paradoxical scenarios where we are mad our player got fouled AND mad he's a terrible ref!), and, for audience members, standing up to cheer will result in immediate ejection from the facilities. But don't worry, this "Made-for-Radio" event will be easily found on your AM dial, and you might not even see the box score until you read the next day's Post-Standard.

How Cuse would fare: Dunking isn't allowed, but then neither are black players. Likewise, three-pointers and "fancy" dribbling. The Syracuse team of Trevor Cooney and four walk-ons loses a nail-biter to Holy Cross, 8-6, severely hurting our KenPom offensive efficiency ratings for the rest of the season.

With only one contest last week, and a road game no less, we don't have any new Taco Time statistics. But, that doesn't mean we can't still talk tacos. Specifically, Taco Bell. Specifically, the secret Taco Bell in Manhattan which I'm now going to tip all you Apple in the Orange alums who still lust for Diarrhea in the Pants.

Back in the early 2000s, back when I still had a real job, I worked at the Museum of Television & Radio, literally watching TV all day--which sounds like so much cooler work than it truly was. Nowadays I work from home and surely wear Syracuse basketball shorts more often than any actual player. 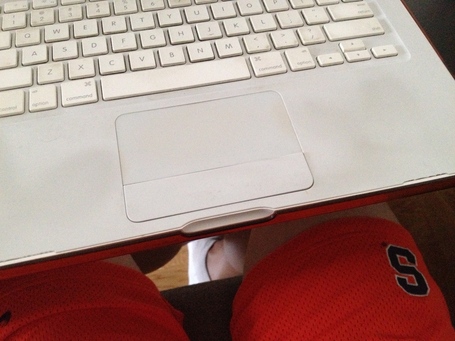 Back then I was poor and always looking for a cheap lunch, but not too many were to be found in midtown. Then one day, I was aimless walking on Third Avenue, when I noticed something intriguing--your standard issue, generic New York City deli, a small flag hanging from its awning depicting the iconic ringing magenta clapper. I was intrigued and entered to find...what looked like the inside of your standard issue, generic New York City deli. But I trekked on through the hallway-wide establishment, walking past the cold cut counters, scooting past the hot lunch bar and that rubbery eggplant parm no one has ever ordered, the by-the-pound salad selections, the bounty of exotic chips and sodas and candy, until I found, way at the back of the deli, what appeared to be a tiny Taco Bell. Slightly smaller than an airport express location, slightly larger than a children's lemonade stand, an anxious, almost sheepish group of office workers huddled near the counter, as if waiting to attend an A.A. meeting very few people knew about.

It a way, it raised more questions than it answered. Was this a real Taco Bell? Or one of those extremely clever knock-offs, like those faux-Apple stores in China? Did some savvy and highly unscrupulous entrepreneur simply print out Taco Bell signage at a FedEx/Kinko's, hoard a handful of "Fire" sauce packets from a legit location in suburban New Jersey or perhaps Staten Island, and then start ordering his crew to sling gorditas with abandon? Whatever the case, the food had some serious "Outside the Bun" verisimilitude and tasted delicious(ly terrible).

Taco Bells are virtually non-existent in Manhattan, so the "Liberty Cafe & Taco Bell (Famous One)" was and is still a major find for New Yorkers. For both your wallet and occasional self-loathing. It's a great place to grab "Fourth Meal" if you find yourself accidentally drunk in midtown after happy hour. And, for my midtown cubicle monkey friends...be prepared to have your mind blown: they deliver.

Aaron Goldfarb is the writer of How to Fail: The Self-Hurt Guide and other things. Syracuse basketball is the only thing he would ever write about for free. Follow him @aarongoldfarb