What The P-S Won't Tell You About...The Missouri Tigers

Two teams enter, ONLY ONE get's Bowl eligibility. Forget the witty lead-in...let's get it on!

Share All sharing options for: What The P-S Won't Tell You About...The Missouri Tigers 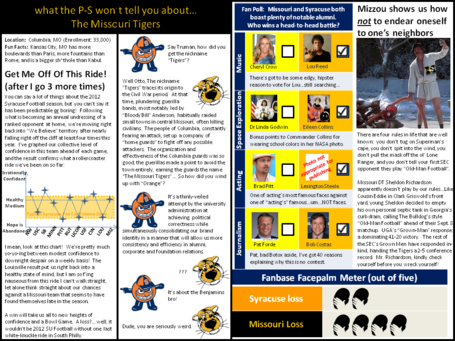 2012 Syracuse Orange Football has been quite a ride. After ten weeks of waiting, the Louisville game FINALLY shed some light on what this team could accomplish if they executed on their game plan and played mistake-free football for 60 minutes. Last weekend, The Syracuse Orange finally found The Glow.

But this isn't the first time a Doug Marrone-coached team has dismantled a ranked opponent on National Television, delighted the Carrier Dome crowd, and put SU one win away from Bowl eligibility. The 2011 West Virginia game and its immediate aftermath looked and felt very similar. The biggest question I have leading into this week's game is whether we will see a repeat of the team-wide capitulation we experienced following that big win last year. My gut tells me we have learned from the experience and have grown as a team, but any correlation between what my gut tells me and what has actually transpired so far this year has been practically non-existent. Therefore, I have no freaking clue what is going to happen in Columbia, MO...but I can't wait to find out.

IN THIS WEEK'S EDITION OF THE PREVIEW, Otto the Orange and Truman the Tiger discuss the origins of their school's respective nicknames, we compare the notable alumni from both schools, and offer a cautionary tale on how not to act when greeting your new conference neighbors! Enjoy, and Go Orange!