What Was With The Ryan Nassib Cutout & Quote That He Never Actually Said?

Louisville used a quote from Ryan Nassib to motivate them before their game against Syracuse today. Weird thing is, he never actually said it.

Share All sharing options for: What Was With The Ryan Nassib Cutout & Quote That He Never Actually Said?

It only really made sense after Syracuse's 45-26 dismantling of Louisville as to why a 9-0 team would need bulletin board material to psyche itself up for a game against a 4-5 squad.

What's really weird, however, was that the bulletin board materials seems to have been completely made up.

If you were watching the game live, ABC cut away quite a few times to a picture of a cardboard cutout of Ryan Nassib. It was accompanied by a quote of Ryan's about how Syracuse has never lost on Senior Day while he's been there. 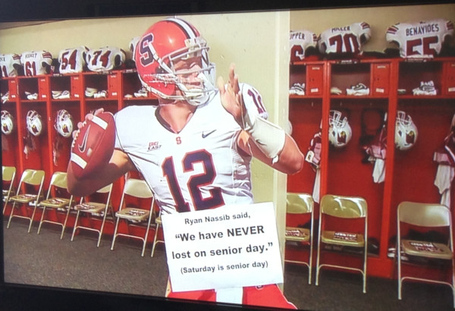 Instead of undressing Ryan Major League-style, they promptly destroyed the cut-out before taking the field as a means of motivation.

I remember seeing it and thinking to myself two things:

1. That doesn't seem like something Ryan Nassib would say.

2. I'm pretty sure that's not even true.

Turns out, I was right on both accounts.

This was actually Syracuse's first win on Senior Day since 2009, Ryan's first season. And there's no record that anyone can find that backs up that Nassib ever said that. Obviously he wouldn't, unless they somehow culled that quote from his sophomore season in some random interview.

So that means the Louisville coaches made up a fake quote to motivate their team, which would be weird and sad even if not for the fact that while working under said assumption, they still went out and lost by 20 to a team with five losses.