Syracuse vs. Pace: What Are You Looking For?

Syracuse basketball returns! Kinda! The Orange host the Pace Setters (yep) in their first exhibition game of the 2012-2013 season. What are you hoping to see out of the team tonight?

Share All sharing options for: Syracuse vs. Pace: What Are You Looking For?

The No. 9 Orange kinda-sorta kick off the 2012-2013 season with an exhibition tilt against the Pace Foods, makers of Pace Picante salsa. That, or Pace University, which I'm not entirely sure is a real thing.

Tip-off is set 7 p.m. in the Carrier Dome and the game can be seen on Time Warner Sports and SNY. Radio coverage will be on ESPN Radio 97.7 locally. TNIAAM's Jeremy Ryan will be live at the game and will have pre and post-game coverage on Twitter. Even if he's there representing a completely-different site... 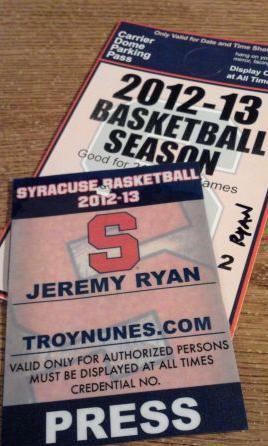 Not that it matters, but, tell me about Pace!

Pace was 13-14 overall last season and 11-11 in Northeast-10 Conference play, which was good for seventh place. The Setters return a pair of NE-10 all-conference selections in Denzel Primus-Devonish and Keon Williams. Primus-Devonish led the team with 13.4 points per game, while Williams was second on the team in scoring with 11.7 points per game. He also led the team on the boards, grabbing 6.6 rebounds per contest.

Lest you think this game doesn't mean anything, you better recognize that it indeed does, especially with a season-opener against San Diego State on the docket.

The outcome of the game is meaningless so it's more about what we see on the floor of our new-look Orange.

Personally, I'm interested to see what the offense looks like. Where is Brandon Triche looking for passes. How are he and Michael Carter-Williams co-existing in the backcourt? Where are C.J. Fair and James Southerland lining up on defense, and how is Boeheim working the subs to make sure he's not too frontcourt-heavy at any given time? If Trevor Cooney plays, how does he look? And of course, how do DaJuan Coleman and Jerami Grant look?

How bout you, what are you looking for in tonight's game?