When the Syracuse Orange football team wins, they rise on the Quest-O-Meter as they take one step closer to the Quest For Beef.

When the Syracuse Orange football team wins, they rise on the Quest-O-Meter as they take one step closer to the Quest For Beef: 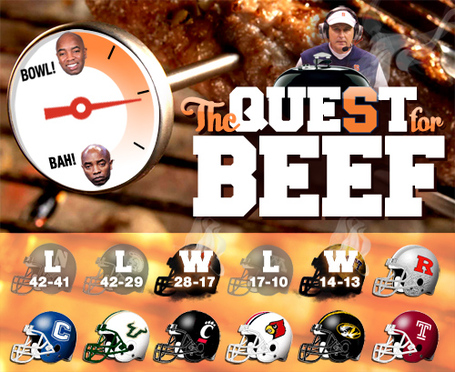 Now, let's take a look ahead to see how our upcoming opponents did and how likely we are to raise the QOM in the coming weeks...

Rutgers Scarlet Knights (5-0): Don't look now but Scarlet Fever grips the Big East. The Knights shut down UConn for a 19-3 win and set themselves up for a terrible fall from the world of the undefeated this weekend. Their schedule is set up so that they could possibly get to 9-0 before playing another quality team, or, we can just end it now.

Connecticut Huskies (3-3): While the Huskies are 3-3, they seem to feel more like an 0-6 squad following the 19-3 loss to Rutgers and another Coach P debacle.

South Florida Bulls (2-4): USF's season is officially in tailspin mode after a 37-28 loss to Temple. The Bulls get the week off and boy do they need it.

Cincinnati Bearcats (4-0):The Bearcats rack up a 52-14 win over Miami (OH) and quietly continue to lurk and wait their turn until Louisville and Rutgers inevitably lose, clearing their way to the conference title.

Louisville Cardinals (5-0): The Cardinals took the week off and watched RU and UC keep pace with them. They head to Pitt for a game they should win, and you know what happens in the Big East when you should do something...

Missouri Tigers (3-3): Missouri's no-good, very-bad SEC season continues with a 19-15 home loss to Vandy. They're dying to get to that game against us, I'm sure. Up next? No. 1 Alabama.

Temple Owls (2-2):The Owls picked up their first Big East win as a new-old-new member with a 37-28 victory over South Florida. They're not a great team but they're dangerous enough for us to keep an eye on.