Hold on, I'm confused. My understanding is that only Syracuse Orange women's athletic programs were allowed to improve exponentially and become legitimate sports teams. No one told me that men's programs, the men's soccer squad, were allowed to do this as well.

While I consult the manual, enjoy these highlights of the Syracuse soccer team's 2-1 victory over Rutgers last night, as well as video of the halftime penalty kicks by members of the basketball team.

First, some thoughts on the basketball team's kicks.

James Southerland - James. Jim. Jimmy. We're gonna need a little more out of you than that. Thanks.

Trevor Cooney - What a kick! I love the effort. I love the athletic ability. I love the long-range shooting. I know this has absolutely nothing to do with playing basketball but, obviously, he's going to be awesome. Great hip-bump with MC Dubz as well.

DaJuan Coleman - Totally fine with him overshooting the goal. Rather he be more physical than back off.

Brian Gravelle was on the scene last night and he had some cool thoughts as well.

ESPN mentioned 12% If what I saw today is 12% then that dude is a monster.

...because No one else will I declare Cooney the winner, Fair second and Baye third. 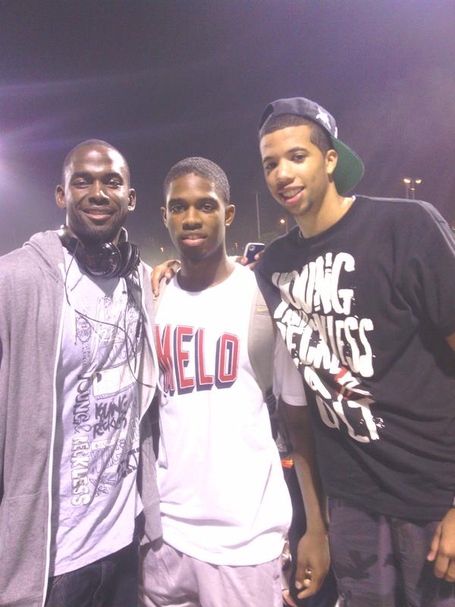 Now, about the men's soccer team. Let's not forget about them because they're on a pretty amazing run...

As the ball rolled in for the game-winning goal, the home bench exploded in celebration. Syracuse clinched its ninth overall win on the season — the most for the program since 1999.

"The turnaround is unbelievable," SU midfielder Ted Cribley said of the postgame celebration. "It lifts us, especially when you’ve been bottled up for such a long time in overtime games."

Syracuse returns to the pitch this Saturday against Louisville. Match time is set for 7 p.m. at the SU Soccer Stadium. Admission is free, so, go. Go watch some more game highlights, including that beautiful golden goal, here.