Introducing The Troy Nunes Is An Absolut Cocktail

Introducing the official cocktail of TNIAAM.

Share All sharing options for: Introducing The Troy Nunes Is An Absolut Cocktail

This Friday, the Syracuse Orange take on the Pittsburgh Panthers in a game that could have a severe effect on your emotional state. Whether before or after, you're probably going to need a drink. So if Syracuse football is going to drive you to drink, you might as well partake in the official cocktail of Troy Nunes Is An Absolute Magician. 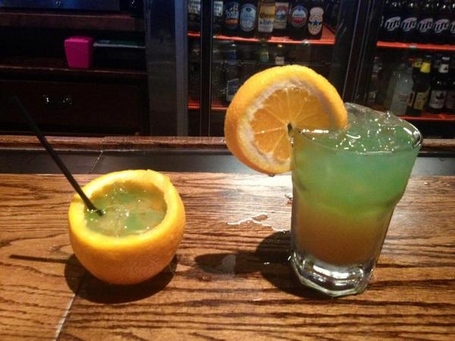 The Troy Nunes Is An Absolut Cocktail is the creation of Jacek Perski, a bartender at Clinton Street Pub in Armory Square. Sure, they have 14 drafts on tap, 50 brands of bottled beer, a full bar and a shot wheel, but when it comes to drinking something that's going to go down smooth, unlike Nate Hackett's offensive gameplan, you gotta go TNIAAC.

So stop by Clinton Street Pub tomorrow or during any SU game, order one up and send over a pic of you drinking it. You'll win...the right to drink it.

H/T to Louis Milman, who started the whole idea.