Two weeks ago, the Quest For Beef Quest-O-Meter was practically at zero. Now, we're halfway home...

By God, everyone. Two weeks ago, the Quest-O-Meter was practically at "BAH!" Now look at it! 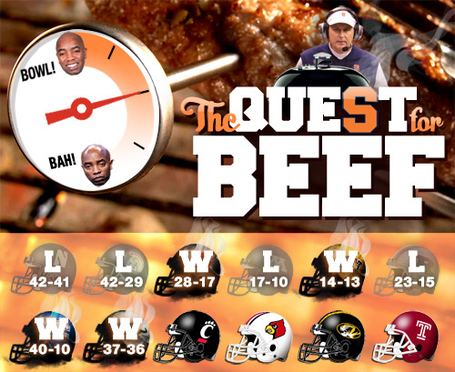 Cincinnati Bearcats (6-2): Their record might look impressive but when you look closer, it ain't. Their SOS is 120th, which is on par with some FCS teams and they've lost two in a row (including one to Toledo). That Virginia Tech win doesn't look quite as impressive as it should. If Syracuse can keep their momentum, this is winnable.

Louisville Cardinals (8-0): All Louisville does is win. Gotta credit them there. They nipped Cincy 34-31 in overtime and vaulted into the Top Ten. Will be great to beat a Top Ten team in a couple weeks...

Missouri Tigers (4-4): Hard to tell what to make of Mizzou. Their record is a bit misleading since they've played the likes of Alabama, Georgia & South Carolina. Then they mopped the floor with Kentucky this weekend. Remember, outside the SEC, they're 3-0.

Temple Owls (3-4):It looks like the Owls are coming back down to Earth. They lost by thirty to Pitt over the weekend. Between that, Rutgers losing to a MAC school and Syracuse winning, it's like the universe is finally course-correcting.