What the P-S Won't Tell You About...The USF Bulls

The arrival of USF to the Big East Conference marked the beginning of Providence's "just wing it" approach to conference realignment. What was really said in 2005 behind the stone walls of Big East HQ? Click the link to find out!

Share All sharing options for: What the P-S Won't Tell You About...The USF Bulls 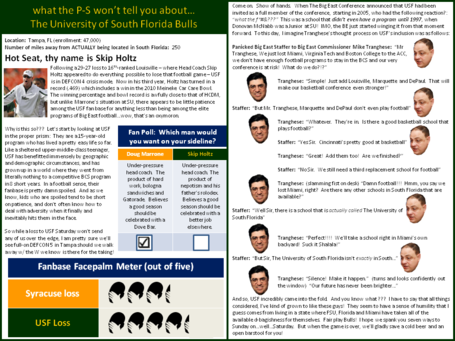 It's always interesting to see how different fan bases react to the relative successes and failures of their football programs. It's particularly interesting when the fan bases come from such different points of view.

On one hand, you have Syracuse fans. We're grounded in rich history and seem to approach the expectations of our football team and coach in much the same way we manage expectations about our famous weather. We want sunshine...we expect sunshine...yet we know we have to practice patience before it arrives. We also understand that history has shown us that the dark clouds can and will return someday, so we never allow ourselves to get too indulgent with the "good times". Taking the analogy further, we're currently somewhere in a Syracuse Spring, where we see the signs of good days ahead, but are constantly bracing ourselves for another 2 feet of snow...thanks for that, Greg Robinson.

On the other hand, you have USF: a school basking in sunshine, with a history so brief that I have been married longer than they have been playing football! In their fifteen short years as a program, they have never experienced anything resembling "bad weather" -- posting a .610 winning percentage, being vaulted to BCS status in their 9th year of existence, and going to a bowl game in each of their first six years as a BCS program. In many ways, USF fans have been spoiled with nothing but good times...until now.

It's October 2012, and both schools are struggling. Both have decent head coaches and competitive talent, yet aren't getting the job done. Yet, the reactions to the current situation that affects us both are noticeably different, and appear to result from our points of view and respective histories. We are uneasy at 3-4, yet have been taught to remain patient in the face of bad days. This is among the driving forces behind why HCDM remains off the hot seat.

USF fans, on the other hand, are faced with a 2-5 record and have no history of adversity to fall back on. Subsequently, they are acting like the sky is falling, and are preparing to take Skip Holtz' hot seat, and throw it right out the second story window Morgantown-style with Holtz tied to it! A loss to The Orange, and you may see some pretty dramatic actions from the folks in Tampa.