Syracuse Basketball: What Do You Think Of Coordinating The Carrier Dome?

This weekend, Oklahoma will "stripe its stadium," asking fans to wear crimson in some sections and white in others. Is that something you'd like to see in the Dome for a Syracuse basketball game?

Share All sharing options for: Syracuse Basketball: What Do You Think Of Coordinating The Carrier Dome?

This weekend's Biggest College Football Game Ever pits the Notre Dame Fighting Irish against the Oklahoma Sooners. Oklahoma's probably going to win and while there are many reasons for that, perhaps one of them will be because their entire crowd will look like a sucker candy: 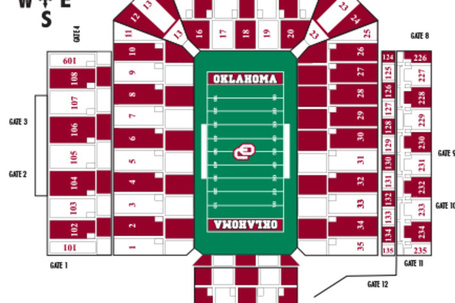 The OU Athletics Department is encouraging all attending the OU-Notre Dame football game to don either crimson or white depending on their seat location inside Gaylord Family-Oklahoma Memorial Stadium.

Got me thinking about Syracuse. No, not for football games. We're still in the precarious "just get somebody, anybody to sit in those seats and let them wear whatever the hell they want" mode.

But how bout for a Syracuse Orange basketball game? What if for, say, the Dome game against the Louisville Cardinals, we bust out a similar crowd layout in orange and blue?

Would it matter? No. Would it be different, possibly fun and give AmeriCU Credit Union a reason to sponsor some new t-shirts? Absolutely.

Of course, if we did do this and the notion of the second color being gray or platinum was floated out there, I'd expect you all to revolt by just wearing orange no matter where you sat.