The Syracuse Orange won the critical first match in the Big East Old Man Regret Cup over UConn. They can win the cup outright this weekend when they take on the USF Bulls.

How many times did the Big East run the Old Man Regret commercial during the Syracuse Orange's 40-10 slobberknocking of the Connecticut Huskies? Five? More? Give it a rest, guys.

Or don't, because everytime you run it, it makes me realize that I'm right to think this guy's regrets are misplaced.

It's becoming very clear to me that Big East Old Man Regret's team lost and never won a championship. Deep down if you really pushed him, he'd admit that to be the true cause of his regrets. He'd also rock back and forth a bunch of times because you pushed him while he's sitting in a rocking chair.

Maybe if Big East Old Man Regret had helped his team to win, he wouldn't be sitting around with all this misplaced emotion, harping about how sorry he is for talking smack. Go rock back and forth on your porch, loser.

As explained here, this cup is for three specific football programs whose fanbases expected so much and have gotten back so little. If nothing else this season, one of them will hoist high this championship trophy that will gleam forever as a bastion of hope and a desire not to end up like a bitter, old man on your porch one day. 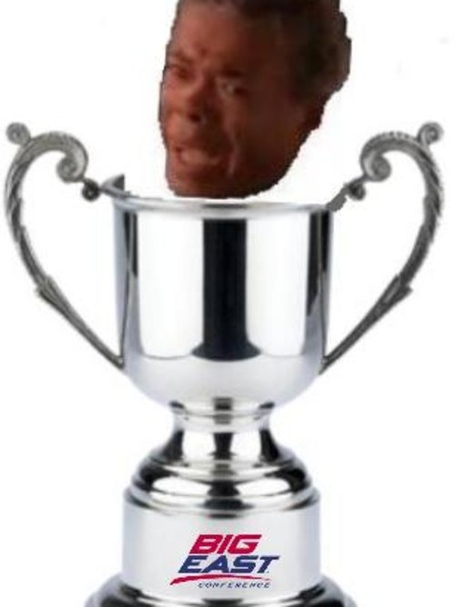 For Syracuse, it would hold its own next to their Heisman Trophy and National Title trophy.

For UConn, it would stand tall next to their Big East Title trophy.

For USF, it would go great next to...uh...whatever books they keep in their otherwise empty trophy cases.