Syracuse Football Week 8 Quest-O-Meter: It's Starting To Come Together, Pepper

One week we think the bowl game quest is over. And then we have a game like the UConn one and realize there's still hope...

Share All sharing options for: Syracuse Football Week 8 Quest-O-Meter: It's Starting To Come Together, Pepper

Last week, we were all doom and gloom about the Syracuse Orange football team's prospects for a bowl game. This week? It's all sunshine and candy apples! Next week? Who the hell knows. But until then... 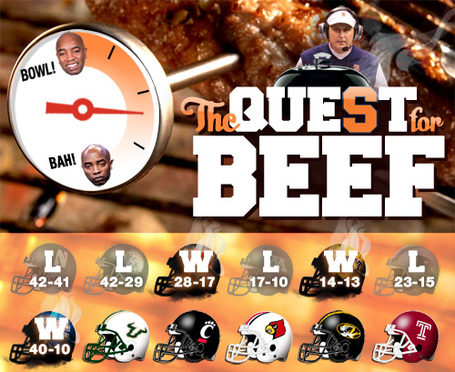 The story of the season remains the same. The schedule has a lot of winnable games left on it. The only question is...will Syracuse now stay out of Syracuse's way long enough to win them?

Let's take a look ahead to see how our upcoming opponents did and how likely we are to raise the QOM in the coming weeks...

South Florida Bulls (2-5): In consecutive weeks, Syracuse could have a big hand in pushing an embattled head coach out the door. Skip Holtz isn't looking too hot these days and coaching himself out of an upset over Louisville didn't help matters.

Cincinnati Bearcats (5-1): About the only thing as unsurprising that learning that Cincy's undefeated start was due to an easy schedule is that we'll learn the same thing about Louisville soon as well. I suppose in a way it's our fault, Toledo was owed a win over a Big East team.

Louisville Cardinals (7-0): The Cards keep rolling with another unimpressive win over a terrible team. They must lead the nation in that category.

Missouri Tigers (3-4): The Tigers got the week off and they probably needed that. They get a chance to right the ship against Kentucky before visiting The Swamp in two weeks.

Temple Owls (3-3): Temple, Temple, Temple. You could have won your third Big East game AND knocked off Rutgers. But no, you had to lose your s*** in the second half. Shame.