I've been thinking hard about what a 30 point romp of UConn and Coach P really means to this team. In reality, nothing much more than what we already knew: this team isn't as awful as it has played. But it also should keep Marrone around for 2013 if there was any doubt.

I admit that I am a newcomer when it comes to Syracuse Orange football in relation to most of TNIAAM crew. Thus, there are times when I must be taken to school. So why not learn from an actual SU Professor/my head editor?

(Ed. Note - This conversation stemmed from comments Rod Gilmore made during the SU-UConn boradcast stating that DOG Gross loves the direction that Syracuse football is headed in and is convinced Doug Marrone is still the man for the job) 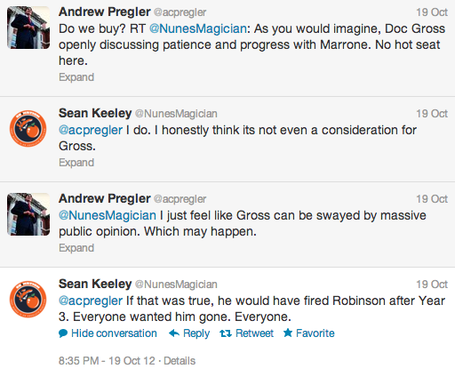 I didn't watch Syracuse football during the Greg Robinson years. I know I was spared. But I have kept up on the Doug Marrone era and know what a lot of us already know following the UConn victory: This team could have two or three more wins, this team is probably not going to a bowl game, and Doug Marrone has kept his job until next year.

I know that USF is looking us dead in the eyes and Temple looms in the horizon, but in reality would it surprise anyone if Syracuse lost? USF has talent and Temple has shown that they are much better than we thought. Therefore, would it be surprising if Syracuse was a road underdog? Probably not.

Therefore, I'm saying that we should take a step back and cool HCDM's seat just a bit. For the first time in a long time, Syracuse thoroughly-dominated an opponent and looked better in every way possible. The special teams were solid, the defense relentless, and the offense was able to maintain their up tempo feel and effectively run the ball.

I know what everyone is thinking: one game doesn't make a season. What if the special teams stinks again? What if the Marrone play-calling becomes inexplicably conservative again?

Cooling the hot seat does not make Marrone immune from criticism. The Orange still only have three wins on the season, a pretty unanimously-agreed upon failure of a season.

But Marrone and company showed what can happen when all goes according to plan; when the offense doesn't commit boneheaded penalties, when the defense isn't recklessly aggressive, when the special teams unit just does it's job. They showed that Syracuse isn't in the basement of the conference, talent-wise.

They did show that the 2012 Orange missed an opportunity to do something special. That isn't enough for DOCTOR Gross to force Marrone out at the end of this season. And you know what? I'll side with the Doctor here and say it's not enough for me either.