The Orange are in the same place they were last week and need five wins in eight games in order to even think about tasting Beef.

Share All sharing options for: Syracuse Football & The Quest For Beef: Week 5 Quest-O-Meter

Since the Syracuse Orange didn't play in Week 5, the Quest-O-Meter basically remains stagnant. The goal remains 5-3 in the final eight. 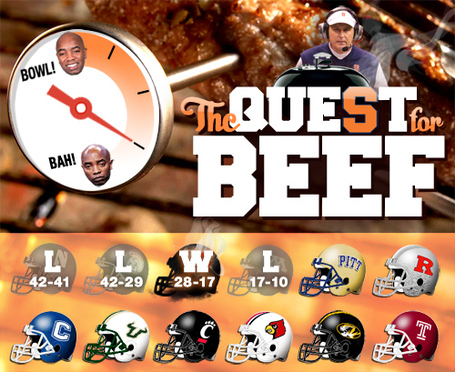 Now, let's take a look ahead to see how our upcoming opponents did and how likely we are to raise the QOM in the coming weeks...

Pittsburgh Panthers (2-2): Just like us, Pitt had the week off. That's a good thing because they're terrible after bye weeks. Feel better about that.

Rutgers Scarlet Knights (4-0):The Knights also took some time off. Don't look now but they look like they might actually live up to expectations for once.

Connecticut Huskies (3-2):The Huskies continue to look unimpressive, this time holding on to beat Buffalo 24-17. Buffalo had a chance to tie late, but failed to convert.

South Florida Bulls (2-3): The Bulls had Florida State in striking distance at halftime, down 13-3, but the Seminoles eventually pulled away for a 30-17 win.

Cincinnati Bearcats (3-0): Don't look now but the Bearcats are for real. They used a late touchdown pass to shock Virginia Tech and send the Hokies reeling for the 2nd-straight week to a Big East squad.

Louisville Cardinals (5-0): The Cardinals are doing their best to be the least impressive 5-0 team in the nation. They overcame a 17-12 halftime deficit to beat Southern Miss 21-17.

Temple Owls (1-2): Temple had their second bye in three weeks, so they'll be well-rested for USF Bulls.