It was as breathtaking as it was unexpected. On October 17, 1987, in 60 minutes of football, Syracuse University threw away two decades of futility, and announced itself on the national stage against the defending champion Penn State Nittany Lions. It was a game that instantly transformed the attitude of the SU fanbase toward the program and its head coach, and may serve as a guiding light as we contemplate what to do about our modern day status.

Share All sharing options for: Celebrating the 25-Year Anniversary of Syracuse 48 - Penn State 21

It was the Fall of 1987, and Syracuse's head football coach hadn't yet quieted a group of vocal fans who were calling for his head. Heading into his seventh season, Dick MacPherson hadn't amassed a particularly impressive resume as head coach. Known as a good recruiter, Coach Mac hadn't totaled more than seven wins in any season, had a .450 winning percentage, and had taken the Orangemen to one solitary bowl game.

Six weeks into the 1987 season, however, the voices of the "Sack Mac Pack" were muted. MacPherson's team had started strong and won each of their first five games against modest opposition. 5-0 was welcomed locally, yet expectations among the fanbase remained in that endearlingly-Syracusian state of glass half-emptyness, as the next opponent was decidedly NOT modest. The date was October 17, 1987-- twenty-five years to the day. The challenge was a home game against the defending national champion Penn State Nittany Lions...a team that was among the truly elite in college football and holders of a humiliating 19-game winning streak against Syracuse.

Given the history between the two teams, and Penn State's pedigree, most SU fans hoped that we could win but didn't dare allow ourselves to expect to win. Well, football has a funny way of surprising you when you least expect it. For what happened on that sunny Saturday was nothing short of the most most breathtaking demolition ever of a Joe Paterno-coached Penn State team, and the most impressive display of football I have ever seen as a spectator. The game itself was the launching point for fifteen years of exceptional football on campus, and was remarkable not only in the ruthlessness of Syracuse’s execution on the day, but perhaps more so in how it instantly transformed the attitude of the SU fanbase toward the program and it's head coach.

Syracuse had long deployed a pro-style option attack, which was most effective against teams with average size and speed. Five games into the season, it had worked very well against BC, Virginia Tech, Rutgers, Maryland, and Miami (OH). In Penn State, however, The Orangemen faced a defense who were seen to be simply too big and too fast, and year after year SU fans rolled their eyes as 20-or-so triple options were run per game against the Nittany Lions. The execution of the triple option was exactly as follows: 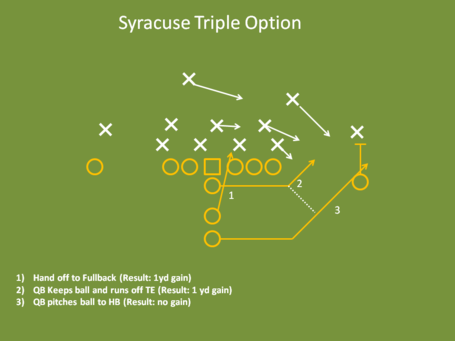 The annual gross yardage coming from all these triple options against Penn State: About 30 yards per game…or so it seemed. Yet Syracuse frustratingly persevered with the triple option against loads of criticism, just as they persevered with their own head coach against loads of criticism. This predictability was about to pay off in spectacular fashion, and I have a short story that only in hindsight foreshadows what we were about to see.

I have a good friend named Tom who in 1987 was a freshman track athlete at SU. At the time, the track team occasionally shared Manley with the football team, and he happened to run into quarterback Don McPherson two nights before the game as he headed into the team's locker room. Just being friendly, Tom shook McPherson's hand and asked if the boys were ready...McPherson's confident response would prove to be prophetic:

"We're really going to surprise them on Saturday"

One Play, Game Over

The Dome was packed to capacity at kickoff, and sitting in the third tier, I sighed as the Penn State "contingent" was back in full force, just as they had been in '81, '83, and '85. It was always simultaneously impressive and embarrassing to see so many PSU fans in attendance, and given the near certainty of the outcome in recent decades, they came into the stadium and acted as if they owned the place. Contrasting the confidence of the Nittany Lion fans were the SU fans...almost resigned to our fate, quietly holding down a pent up frustration that would explode if Syracuse gave us the chance to believe we could win. And so we waited.

At kickoff, Penn State drove the ball into the end zone for a touchback. So, with first-and-10 on the Syracuse 20 yard line, SU surprised absolutely no one by lining up in the pro formation. Again surprising no one, McPherson took the snap and started down the right side of the line for what appeared to be yet another triple option.

What happened next will live in my personal memory forever. Just as the Penn State defense bared-down on the play, McPherson quickly stopped, took three quick steps to his right and prepared to throw. I kid you not, the entire Dome gasped in surprise! Darting upfield, past the suddenly frozen PSU defense was skinny freshman receiver Rob Moore. So surprised were the Nittany Lion safeties, both slipped as they tried to adjust to the trickery. Even the back judge fell right back on his ass as Moore raced past him. Here’s how the play unfolded: 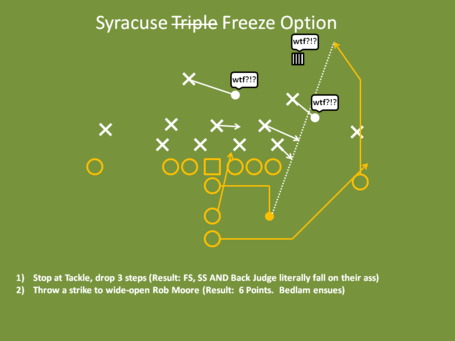 Don McPherson: "We're really going to surprise them on Saturday."

Number 9, I love you! McPherson calmly threw a strike to Moore, who ran uncontested into the Penn State end zone. For those of you who were at that game, you heard a guttural roar that sends chills down my spine to this day. For those of you who weren’t, try to imagine the emotion a frustrated, beaten-down fanbase would have on a single play that within seconds took you from faint hope, to belief, then straight to expectation that we were going to win this game! On one play, in ten incredible seconds, Syracuse took 19 years of failure and shoved it right down Penn State’s lilly-white throats. One play, and it was already "game over".

The release of pent up frustration nearly blew open the Dome. Amidst the wild celebrations, I looked over at PSU fans seated in either direction. They were looking at each other like "uh oh…I think we picked the wrong day to be here…" And they were right. The team fed off the insane energy of the crowd, and before people could even catch their breath, Syracuse was up 41-0. It was the most amazing display of football I have ever seen. In the first half, against the defending National Champions' vaunted defense, Syracuse’s seven first half drives resulted as follows: touchdown, field goal, touchdown, quick kick that Penn State muffed and we recovered...which led to a touchdown, touchdown, touchdown, field goal. The order of the scores may be off due to memory, but it was a fact that we scored on every single one of our first half drives.

The scores themselves were incredible! On one occasion, deep inside the Nittany Lions' half, McPherson raced down the left side on a triple option, froze some poor defensive end by by spinning the ball in his left hand as he faked a pitch to the HB, and sprinted untouched into the end zone as the said defender scrambled to pull his hip pads back up from his ankles. On another, McPherson lofted an underthrown second quarter pass into the end zone. Tommy Kane lept-up to catch the pass with a Penn St defender all over him. Having misjudged the flight of the pass, Kane simultaneously jumped up, threw himself parallel to the ground AND reached below his body for a ball that was a foot below him. It was a physically impossible catch, but on this day, everything was going to go right for the 'Cuse.

As the halftime gun sounded, the Syracuse crowd roared its approval...and the Syracuse team was so stoked that you could see them roar back as they sprinted past the student section and into the locker room. The rest of the game was a formality as MacPherson started the second half by using his bench. Penn State clawed back three scores, before MacPherson sent the first team offense back in one last time just to put it beyond doubt. They effortlessly scored one more TD.

48-21. Indescribable. No matter the color of your shirt, you were left incredibly impressed with the Orangemen. The Penn State fans, to their credit, mostly stayed in their seats to admire the play. Even Joe Paterno was left so impressed by Syracuse's display that he entered the SU locker room after the game ended and addressed the team.

"You played a great game today. You are a great team...now go and keep the National Championship in the Northeast!"

25 Years On...Can We Learn Something?

It is the Fall of 2012, and Syracuse's head football coach still hasn't yet quieted an emerging group of fans that are calling for his head. Well into his fourth season, Doug Marrone hasn't amassed a particularly impressive resume as head coach. Known as a good recruiter, Coach Marrone hasn't totaled more than eight wins in any season, has a winning percentage just shy of .450, and has taken the Orangemen to one solitary bowl game.

In most ways, 2012 is not 1987. It is increasingly hard these days to have patience in the face of high expectations. It is hard to stay the course and build a program into something special when the day-to-day results aren't there. I can't help but ask myself whether Coach Marrone is the right man to lead this team to greatness. But 25 years ago, our patience in a man and in a system were rewarded... not four years, but six-and-a-half years into a now legend's coaching tenure on The Hill.

Perhaps we can look back on the great accomplishment of October 17, 1987 and maintain our modern day patience for a man and a system for just a little longer. Perhaps our hope will suddenly (and spectacularly) turn into belief and then straight to expectation once again.