Another loss means the Quest for Beef slips away from the Orange that much more.

With this weekend's loss to Rutgers, we're getting to the point of no return. The schedule isn't mega-daunting but it's not the teams left to play that concerns me, it's the Syracuse Orange that concern me. The momentum from the Pitt win is not only gone, but the hopelessness that existed beforehand is back and stronger than ever. 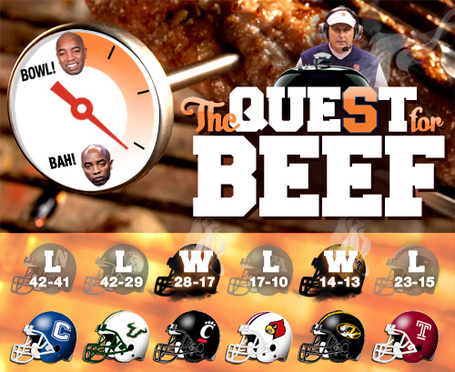 Quite a drop from last week to this week. Honestly, it's not looking good at this point. We have to go 4-2 from here on out and that includes games against Louisville, Cincy and Missouri, not to mention a better-than-advertised Temple. And honestly, can we say that UConn or USF are safe bets? Not at all, not with the way we're playing.

Let's take a look ahead to see how our upcoming opponents did and how likely we are to raise the QOM in the coming weeks...

Connecticut Huskies (3-4): If there's any other fanbase in the Big East that's as miserable as us right now, it's this one. They just lost to Temple, coached by the guy some UConn folks wanted instead of Coach P, as the same-old Coach P/DeLeone mess repeats itself.

South Florida Bulls (2-4):The Bulls got the week off, which was a pleasure for their fans. Seriously, the Syracuse-UConn-USF games should be for some kind of Sorrow Cup. Not looking good for Skip Holtz.

Cincinnati Bearcats (5-0): And you thought Rutgers has played a weak schedule? The Bearcats are still playing teams like Fordham. They might be good (they did beat Virginia Tech) but they're still quite unknown.

Louisville Cardinals (6-0): The Cards keep winning, but, just like Rutgers and Cincy, they remain a bit of an enigma. They beat Pitt but they also gave up 35 points to Pitt. You have to wonder how they'd do against a quality opponent.

Missouri Tigers (3-4): The Tigers might not regret the move to the SEC in the bank but they're sure regretting it on the field. They got manhandled by No. 1 Alabama, 42-10. And I literally mean manhandled. They're going to have a similar record to us by this time but still, they're playing Alabama.

Temple Owls (3-2): Don't look now but the Owls have on two-consecutive games in the Big East since returning. It's also the first time they EVER did that. Uh-oh, you guys.