The Syracuse Orange sum up their entire season in a 23-15 loss to Rutgers full of penalties, mistakes, turnovers, questionable decisions and strange playcalls.

As if it needed to play a game that encapsulated everything that's gone wrong this year, the Orange showcased all their best penalties, miscues, turnovers, mistakes and questionable play-calling in a 23-15 loss to the Rutgers Scarlet Knights. The Knights move on to 6-0, the Orange drop to 2-4 and a bowl game opportunity slips a little further away from Doug Marrone's squad.

Syracuse's comeback at the end of the game was more frustrating than fulfilling. It just proved what we already knew. This team could have easily won this football game. Instead, it made mistake after mistake, making Rutgers look better than they were and making Syracuse look like what we are sadly used to seeing.

I'm not gonna sit here and recount all the mistakes. As if you and I don't already know what they are and aren't already sick and tired of watching them and talking about them and hearing about how it's going to change and then seeing that it hasn't. You know how I feel about Doug Marrone but I think it's pretty clear that, short of a miraculous turnaround, he will enter the 2013 season on the hot seat. There's just no getting around it at this point. 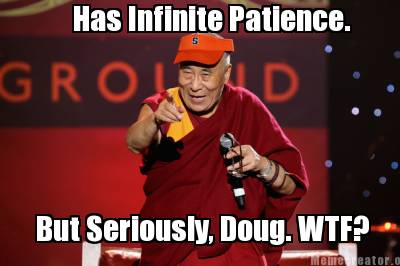 Remember when people were talking about Ryan Nassib's draft stock? That was fun. Nassib has been on a downward trend for four games now and he just looked completely out of sorts in this one. He finished 25-of-43 for 352 yards, one TD and two INTs but that line sounds a lot better than his day (which also included a backbreaking fumble) actually was. He was erratic, constantly seemed confused and held on to the ball way too long way too many times.

Jerome Smith actually had a solid game again. 67 yards on 15 carries. For some weird reason, the Orange seemed to really want to make Prince-Tyson Gulley happen, despite the fact that it was obvious to anyone that it wasn't his day (5 yards on 7 carries).

When it comes to the Tank package, here's what a smart person would do. They'd run the Tank package as they did for the Adonis Ameen-Moore touchdown. Smart move. Then, late in the game when the Orange had the ball on the 3, a smart person would send the Tank in...but do something different with it. Fake handoff & dump to the TE. Bootleg run. SOMETHING OTHER THAN THE OBVIOUS THING, which is what Syracuse did and Rutgers, obviously, sniffed it out.

Speaking of, we could write a book about Syracuse's red zone offense at this point. First and goal from the three and you run three shotgun plays and the most expected run play of all time? I'm not mad, I'm impressed. No, actually, I'm both.

Marcus Sales led the Orange with 100 yards on four catches while David Stevens caught the most passes (five) for 59 yards. Sir Alec Lemon had four catches for 58 yards, Jarrod West had four for 53 yards and Chris Clark caught one lone ball for a 40 yard touchdown.

The defense turned in another stellar performance given the circumstances. They held up for as long as they could until they just simply had to break under the weight of the offense's miscues. Siriki Diabate led the way with thirteen tackles.

Steve Rene. Sorry, I don't get it. Until someone asks Doug Marrone why Steve Rene is the only person capable of returning punts for this team, I will refuse to believe it. He is just not good at it. Forget the fumble, which is admittedly hard to do. Just look at the last punt of the day. With time and field position absolutely critical, he ran right into two tacklers as fast as he could, rather than trying to make a play. It defied logic.

Ross Krautman 0-for-2 on field goals. The 50-yarder, not his fault. He shouldn't have been kicking it. They should have gone for it. The blocked one returned for a touchdown? More his fault, though you can draw a direct line from yet another Syracuse red zone penalty to that botched kick.

Last week I said that hope lived to see another day. Honestly, right now, I think that hope got snuffed out and buried in Piscataway. Sure there are teams left on the schedule that Syracuse can beat, but, what does it matter when you're so good at beating yourself?