What the P-S Won't Tell You About...The Rutgers Scarlet Knights

In today's preview, we revisit the comments that touched off a "spirited" exchange on Tuesday between Nunes Magicians and a band of trolls guests from Rutgers. We take the time to dive into the rich history of Rutgers football and offer up their ten greatest moments. To top things off, we get paid a visit by the world's most famous birther, who contests the legitimacy of Rutgers' claim that they are "The Birthplace of College Football."

Share All sharing options for: What the P-S Won't Tell You About...The Rutgers Scarlet Knights

What on earth happened Tuesday???

I provided an excerpt from this week's preview that included a satirical declaration of my disdain for Rutgers football, and before I knew it, all hell broke loose! I hadn't seen anything like that in a while. Some of the regulars were in there throwing down, as well as some names I hadn't seen in a while...I even think I saw Dan Lyons kill a guy with a trident! Seriously Dan, you might want to lay low for a while...

I learned two things from the exchange. First, I probably should have used a word other than hate to describe my feelings toward Rutgers. Sorry about that. I think most of us know that the use of hate in the context of sports fandom is somewhere near the "I hate that I can't fit into my size 33 jeans anymore" end of the hate spectrum. The problem is, I have only a limited number of words that I can use in a preview, and hate has more brevity than "I am perhaps irrationally annoyed by Rutgers because they are no longer our annual punching bag."

Second, I am even more certain of my assertion that no fanbase misunderstands the history and hierarchy of college football. I mean, the arguments supporting their pedigree were priceless, particularly the one poster who used their Middle Three Conference championships as evidence of their storied past. Just to recap, the Middle Three Conference was the following:

Wow, the comedy sometimes writes itself. Anyway, on to the preview. Enjoy, and Go Orange! 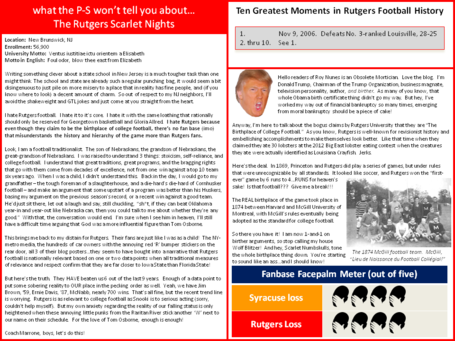