A Critical Analysis Of The 2012 Syracuse Football Intro Video

Syracuse Athletics has finally made the 2012 intro video we've heard so much about available for the rest of us as part of their fancy new website all about Syracuse Orange football, SyracuseFootballTeam.com.

Share All sharing options for: A Critical Analysis Of The 2012 Syracuse Football Intro Video

Syracuse Athletics has finally made the 2012 intro video we've heard so much about available for the rest of us as part of their fancy new website all about Syracuse Orange football, SyracuseFootballTeam.com.

Go give the video a watch and then let's analyze together.

We open with a guy who is either taking a breather after his morning jog or bowing at the Ernie Davis statue, or possibly both.

He walks to the Dome and we realize he's actually a Syracuse version of Bruce Willis' character from Unbreakable: 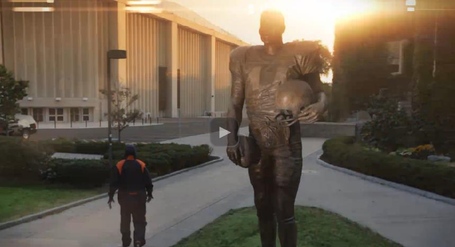 From there it turns into a first-person shooter game in the Dome (CODENAME ORANGE: OMEGA SQUAD), we pass some Syracuse players giving each other simultaneous bro hugs and then Sir Alec Lemon welcomes us into the locker room.

We enter the locker room where various Syracuse football players, including RGLCL are hanging out, but not talking to one another, as if someone said something really mean moments before and we awkwardly walked through the room as everyone processes it: 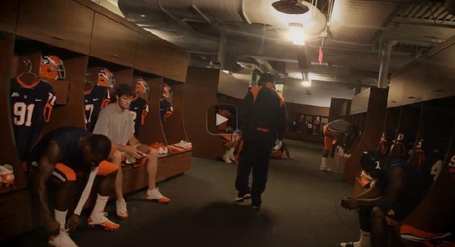 We put on our uniform and gear the only way we know how, via a montage. Meanwhile, other Syracuse players are getting ready and Alec Lemon is back, yelling at people and generally being mean: 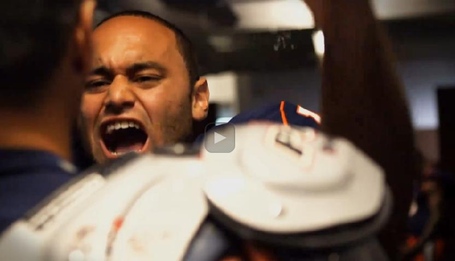 There's an Inception BRAAAAAHHHHM, our first clue that this may all be a dream or a dream within a dream, so we just try to stay alert because any moment we may need a "kick."

Everyone starts moshing. Macky MacPherson looks at the moshing, which is apparently the signal to stop moshing. Some people stop to put on their helmets while others keep moshing. Someone has a very elaborate chest tattoo. 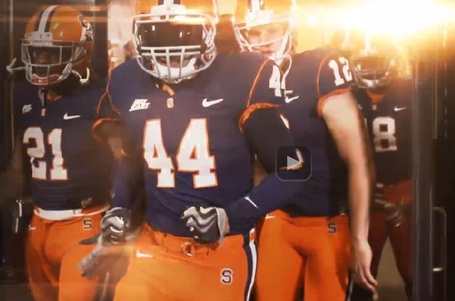 Even now, Ryan Nassib is bored to tears. But he leads us anyway, what courage...

The team walks down a hallway full of holograms cheering them on. Don McPherson, Donovan McNabb, Ernie Davis and other Orange heroes lead the way. 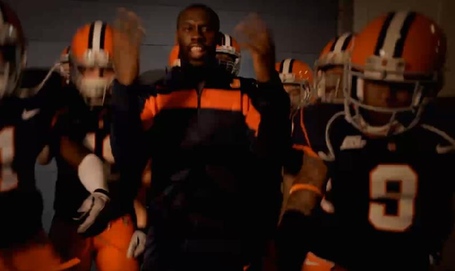 Dwight Freeney appears, apparently in the midst of filming a Most Interesting Defensive End In The World commercial... 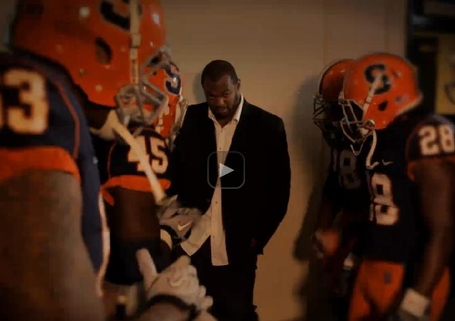 Jim Brown emerges from the shadows! He brings with him the power of FOOTBAWL!!! 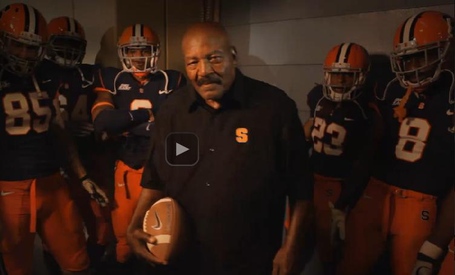 He gives the power of FOOTBAWL to the new No. 44, nods as if to tell us that it is time and then the football team does some kind of war dance that unleashes a deadly mist into the air. The mist enhances the Syracuse football team with magical powers of FOOTBAWL and then....

We are now inside a Syracuse-themed Lego Land with images of Syracuse football lore strewn about. This is the magical land of FOOTBAWL and we are one now with the Gods.