After The Aircraft Carrier: What Special Places Can SU Play Next?

Is playing on an aircraft carrier the best we can do? Are there other venues out there that would be seen as unique, or at least must-see television? As we make our final approach to The Battle on the Midway, let's explore a few other options that could be intriguing under the right circumstances.

Share All sharing options for: After The Aircraft Carrier: What Special Places Can SU Play Next?

Okay, playing on an aircraft carrier is just plain cool. It's likely to be a once-in-a-lifetime experience for us to see our boys play in such a setting. But are there other venues out there that could offer a fascinating setting for the Syracuse Orange if it was played in the right conditions (or at least the right time of the year)? I think so! Below are a few options (some more realistic than others) that would be sure to have us all talking. 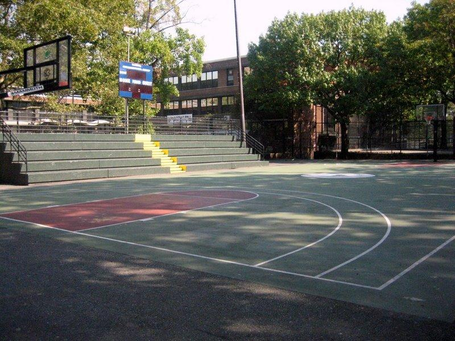 I suppose if you want to be New York's College Team, you would struggle to find a more iconic venue than the small court located on 155th Street and Fredrick Douglass Boulevard. Made famous by streetball legends, former and current NBA greats, Rucker Park is a sort of ground zero for American basketball. It was also one of the courts where a young Brooklynite named Dwayne "Pearl" Washington developed his swashbuckling game prior to arriving at Syracuse in 1983.

Yeah, weather and limited seating would make for a logistical and financial challenge (though you could imagine some insane ticket prices for such a setting), but just think how cool and refreshing it would be to see a meaningful game between local teams like Syracuse and, say, Iona, Manhattan, or Fordham in such a special and intimate setting? The cool factor would be off the charts, but there would have to be some tweaks to the play to fit the venue.

For starters, broadcast teams have no business at Rucker. Rather, I'd vote for Gus Johnson calling the play-by-play while stalking the crowd like one of Rucker's famous courtside MCs. You'd also HAVE to let the crowd hang close to the action and get crazy as the action unfolds like what happened when Kevin Durant came to Rucker. Imagine James Southerland getting hot and drilling a few threes back-to-back??? Sprinkle some former Rucker greats like The Pearl and Chris Mullin in the crowd, and that folks would be must-see TV!

Syracuse University really should be able to claim the right of Prima Nocta, Braveheart-style, on any newly-built arena in the state of New York, right? Right. So, there's this pretty new arena that just opened up in Brooklyn, and we really should be the first D1 school to play in it...

Look, It's really a great fit for us. Brooklyn is increasingly recognized as being cooler than Manhattan these days, and as Syracuse remains among the college hoops' "in crowd", perhaps we should look to drop MSG and the depressing Herald Square area given that it is increasingly tired, old, and well...Big East. Plus, we don't need an excuse for DOCTOR Gross to hang out with the Brooklyn glitterati, but there's plenty of star power for our AD to enjoy.

In the winter of 1980, at Manley Field House, John Thompson Jr. set the spark for what has become one of the true great rivalries in all of college athletics. His famous quote, "Manley Field House is officially closed" ended Syracuse's 57-game home winning streak at the venue in Manley's very last game, and has indelibly placed Thompson, and the Hoyas as our public enemy #1 ever since.

Imagine the hype if the two schools agreed to put it on the line at Manley one more time??? It's the ultimate hardwood grudge match...Could you imagine the buildup as Syracuse attempted to avenge that unbearably painful defeat? You'd give JB a chance to exact revenge and restore Manley's honor, OR give JT3 an opportunity to cement his legacy alongside his father and destroy us all over again? It would be high-risk but high-reward, and would put SU v G'town squarely in the limelight! Come on, put the court back on the floor, throw up some bleachers, get Otto's Army in a froth, and proudly declare "Manley Field House is Officially OPEN!"

Alright, can I just have fun with one of these? The Burj al Arab is seen by some as the most luxurious hotel in the world. Standing slightly under 1,100 feet high, and placed on an artificial island, the hotel has 202 rooms whose price point STARTS at $11,000 per night! I'm sure just by reading this, Laurie Fine is preparing to hold her next press conference there...

Yeah, so the price point will probably discourage most Syracuse fans to stay home (meh, they'd probably stay home if the game was played for free in a gym outside Rochester), but who wouldn't want to at least see a game on TV played at the hotel's private helipad, poised precariously 1,000 feet above sea level...Imagine watching a game with a view like this: 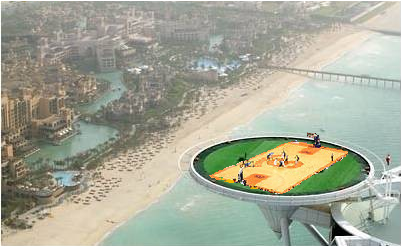 Thank goodness Mike Hopkins no longer plays, cause he'd dive right over the edge for a loose ball within 5 minutes of tip-off. And while I'm sure most of Dubai may not have a serious rooting interest in Syracuse Basketball, surely we can engender a bit more diplomatic courtesy than our rivals in DC when it comes to internationally-played games. I say we do it!

Syracuse vs. San Diego State: Battle on the Midway