Orange Parenting: Time Out Doesn’t Mean They Were Naughty

Share All sharing options for: Orange Parenting: Time Out Doesn’t Mean They Were Naughty

I have to start out with a confession today: We didn’t attend the now infamous game against West Virginia. Just around the time that Coach Huggins was watching a certain replay in the locker room, we were loading our Little Oranges into the car to go see the women take on the Cincinnati Bearcats. Yes, I know I wrote about our expertise in bringing children to the Dome. However, I didn’t mention that it’s much easier to attend sparsely attended games where there's room to run stairs and spread out across ten seats.

Oh, it hurts to know that our Syracuse Orange men are playing a top-tier game going on 12.1 miles away. But it is also a worthwhile experience to hear the Little Oranges giggling in their playroom while their Daddy yells, "Gosh darn it, mother frogger" at the HDTV. (Please stay tuned for a future column where I explore the devolution of Daddy’s vocabulary.) Our family can save the doubleheaders for a few years.

Due to swimming upstream in the parking lot issues, we walked through the turnstiles just at the 4:10 tip-off. After the requisite check to see if anyone had to go potty, we allowed our older daughter to pick our seats. (Yeah, general admission!) She strategically headed for row M, the first letter of her name, but I nudged her in the direction of D for Daddy and we ended up with better seats.

On our feet, waiting for the first field goal, I reminded the girls to stand and clap. New Otto was on our side of the court, though, and as soon as we took that 2-0 lead, off we went for a chaperoned visit. The girls didn’t notice a thing about Otto’s new gloves or swoosh, and only did a little cowering between my legs.

Back at the seats, I was wondering if the girls had any awareness of the basketball game going on, when I actually heard the question, "Why did he say, 'Time out on the court?'" Baby steps, here, but I actually got to explain something relevant.

By the end of that under-16:00 time out, Littler Orange announced, "Go pee-pee." Off we went for a four minute trip to the bathroom. That is four minutes of playing time, I mean. She had to look into every stall in the empty bathroom before choosing, insisted on using her own foot to control the water (a challenge at less than 3 feet tall), and insisted that my hand-waving in front of the paper towel dispenser wasn’t sufficient and she’d do it herself. Upon returning to the seats, guess what her older sister announced?

With just over 8 minutes left in the half, and during a Cincinnati run to take the lead, the girls noticed Otto near the band. I volunteered to take them over to see him again, thinking that we could sit behind the basket and they could watch the cheerleaders, band, and Otto while I finally got to watch the game. This is the one part that sort of went according to plan. The band was playing keep-up with a balloon, a game with which the girls are familiar, and this was much more their level. Thank you, Sour Sitrus, for entertaining my kids for the remainder of the first half.

Daddy took the girls to get popcorn at halftime, leaving me to discover that it was Girl Scout day at the Dome. 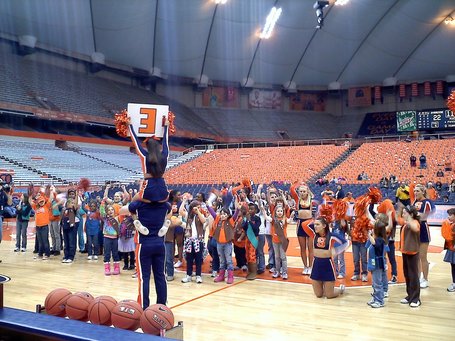 Seeing these Little Oranges gave me the opportunity to reflect and observe. Should I be insisting that the girls pay more attention to the game? With all of these kids around watching basketball, were my girls too coddled with their meandering during the action and constant snacking. For the rest of the game, I watched. My rough estimate is that only about 5 of the girls in this photo could tell you about a single play. They sat or stood, deep in conversation with one another, proud to be wearing their Orange but with basketball attention spans of fleas. I mean no offense, future Orange die-hards. Again, baby steps, and eventually you'll all learn to appreciate the game.

After coming to terms with the idea that my daughters are in this for the long-haul and I should just let them enjoy the Dome in their own way, I unloaded the purse for the second half. Crayons, lollipops, a Twix bar, and the iPod gave me some grown-up time. 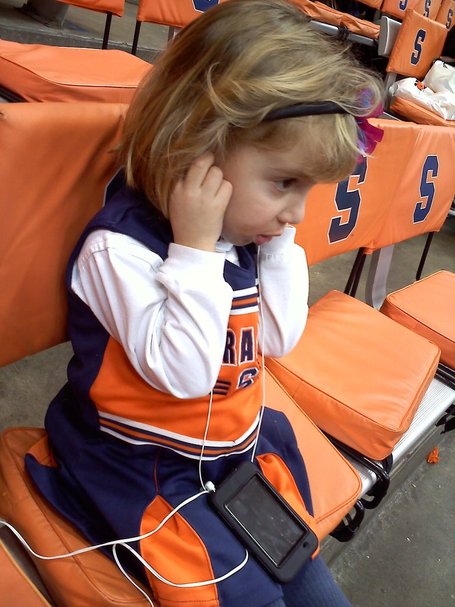 I watched Coach Q take off his suit jacket as his Orange tried to close a 10 point deficit. The comeback was impressive and the adults in the crowd were really into the action. The game came down to a Cincinnati go-ahead basket in the final seconds. I went to start collecting the girls and found that they weren't right beside me anymore. Part of our training for them is to head for the railing above the locker room tunnel as soon as play stops. There were my 2 and 4-year-old, hanging over the bars, awaiting high fives from the players. Though I considered calling the girls back, thinking about how a competitive player might feel after losing a close game, the Orange women kept their chins up and smiled while reaching up to eager hands. 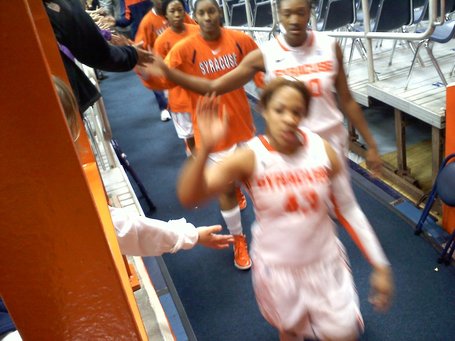 The next Orange women's home match-up will be this Saturday against USF at 1 p.m. I know my Little Oranges are game.