Welcome back to a new episode of The View. The Orange women have been busy winning (and losing) this week, so let's read all about it.

LAST WEEK: The Orange opened the week by playing in front of a record crowd of 4,357 as #3 UConn came to the Dome. The crowd propelled SU to an early 18-11 lead, including Iasia Hemmingway scoring the first six Orange ponts. But it was all downhill from there. UConn seized control, and was ready to take a double-digit lead into halftime. However, a five-point Orange spurt gave the home team a glimmer of hope, trailing by just seven at the break.


When the teams came out for the second half, UConn showed why they have now won 21 straight against Syracuse, outscoring the Orange 55-21, for a final score of 95-54. Syracuse, the nation's top rebounding team, was outrebounded 42-28, and shot only 30.6 percent from the field. Tiffany Hayes led the UConn attack, scoring 35 points. For the Orange, Iasia Hemmingway scored 15 and Carmen Tyson-Thomas had 11. 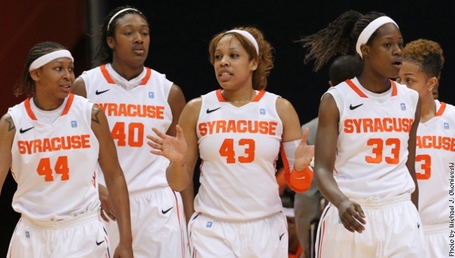 On Saturday, shortly after the men defeated West VIrginia, the Orange women hosted Cincinnati. The Bearcats took a five-point lead into halftime, and the lead swelled to 10 early in the second half, 36-26. Undeterred, the Orange went on a run, and tied the game at 43, and led 54-53 with just over one minute remaining. Whereas the men held on against WVU's best late shot, the women were not so lucky, as Bjonee Reaves hit a jumper with five seconds left, to sink the Orange 55-54. Iasia Hemmigway had 12 for SU, and Kayla Alexander scored 11.

In other news, Kayla Alexander was named to the Big East Honor Roll.

THIS WEEK: Syracuse travels to Providence on Tuesday, and hosts South Florida on Saturday.

LAST WEEK: Syracuse traveled to Connecticut, for their last non-con games of the year, against Quinnipiac. The Bobcats shutout the Orange 3-0 on Friday, behind a 38-19 advantage in shots on goal.

On Saturday, it was a different story, as Syracuse goalie Kallie Billadeau made a whopping 53 saves in a 3-2 Orange victory. Margot Scharfe and Megan Skelly scored in the first period for SU, and Nicole Ferrera broke a 2-2 tie by scoring the winning goal with 8:32 remaining in the third period.

THIS WEEK: The icers host CHA foe Robert Morris on Friday and Saturday, to conclude their home schedule for 2011/2012. 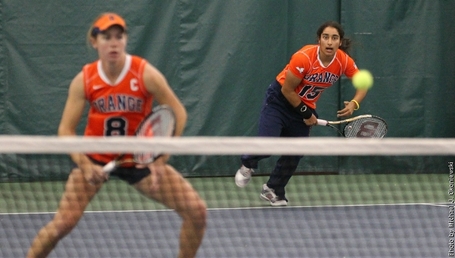 THIS WEEK: Syracuse registered their first win of the season in their home opener on Friday, sweeping St. Johns 7-0. The match was all Orange, all the time, as Syracuse swept doubles, and won all singles matches in straight sets. In total, SU won 72 singles games compared to just 18 for the Red Storm.

The Orange kept out the brooms on Sunday, when they traveled to Buffalo, and swept UB 7-0. Syracuse swept every match except for one in straight sets, as the Bulls were never in the match.

Syracuse is now 2-2 on the season.

NEXT WEEK: The Orange spend next weekend in beautiful Ohio, with a Saturday match at Ohio State, and a Sunday Big East battle at Cincinnati.

IN THE NEWS: Syracuse was picked to finish second in the preseason Big East coaches poll. DePaul finished with 130 points to 128 for the Orange, who are the two-time defending Big East tournament champions. Notably, SU had four first place votes, to three for DePaul. Notre Dame (3), Louisville (2), and South Florida (1) also received first-place votes. Because we care, Georgetown was picked to finish 12th in the 13 team conference.