As fans of the Syracuse Orange, we know everything there is to know about the zone. We know that the key to beating the zone is have someone flash to the free throw line, we know that you can shoot over it (but you better know your business), we know that it is is difficult to defensive rebound out of it, we know that you can't simulate it in practice, and we know that when we lose, we probably should have played more man /syracuse.com.

At the 20 game mark, and before venturing to Notre Dame (home of the Ugly Three-Point Shooting White Guy), I thought we could look at two elements of the zone and if they're working: Turnovers Forced and Three Point Defense.

First, let's get the heavy lifting out of the way. The Orange are playing very well defensively. At .89 points per possession, Syracuse's defense is tied for 13th in the country (Wisconsin leads the nation in Defensive Efficiency with .82). Other high defensive rankings:

So yeah... we hold our own. The 2-3 zone as Boeheim and the Orange execute it should do two things: force people to burn clock and take contested threes, and to create turnovers. Is it doing this?

To look at this, I didn't want to just look at our average (30.7%). I wanted to see if teams shot more poorly against the zone than they do typically. I also wanted to see if the zone would lull people in to shooting the three ball more than their average. I came up with this chart. 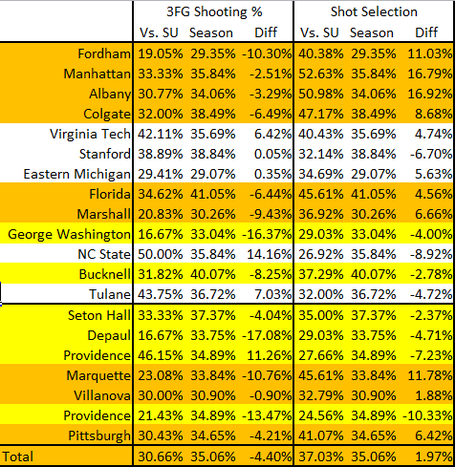 As you can see, we succeeded in both categories in nine of the twenty games we've played, and we merely prevented 3pt shots in a further six. On the whole, we took a full 4.4 points off our opponent's season 3FG%. Were our opponent one giant team, they would go from being ranked 140th (tied with Drexel) to 294th (tied with South Carolina State, Georgia State, and Texas A&M).

I will admit, this wasn't as strong as I thought it would be. Big East teams seem to be adept at not forcing up way too many threes against us. That's the price of familiarity.

Now we're cooking with gas. Syracuse is forcing turnovers at an astounding clip. Our Opponent's Turnover % is an astounding 27.1% That's the second best in the country behind Cleveland State of all teams. Here's the game by game, versus their season average. 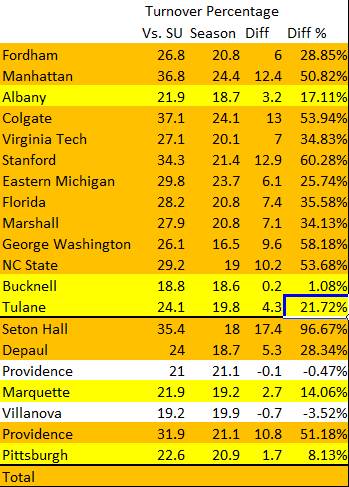 First, my apologies, but I didn't do these calculations myself so I couldn't accurately come up with totals at the bottom there (all raw stats and metrics are courtesy of Statsheet.com. Also, apologies for highlighting that Tulane percentage. That was just a mistake. (Turnover percentage is simply Turnovers / Possessions)

The orange here highlights teams that we forced to turn the ball over greater than 25% more than they are accustomed to. Yellow highlights those that increased, but not as drastically. White are the two teams that handled the ball (ever so slightly) better against Syracuse than they usually do.

This was a fun little exercise to kill an hour, but it doesn't prove any thing we didn't already know. Our defense is still good. The team still has to play the game, but they should play with confidence. Their defense is forcing teams to play less than they are capable of remarkably consistently.