Syracuse vs. Rhode Island: Get To Know The Rams

Share All sharing options for: Syracuse vs. Rhode Island: Get To Know The Rams

Doug Marrone says that the Syracuse Orange won't overlook the Rhode Island Rams when the two teams meet Saturday. Especially considering his history with them...

Marrone says he's "0-and-1" against the Rams, having lost to them as an assistant at Northeastern in 1994.

But who exactly are these Rhode Island Rams and what should we expect when they infiltrate our Carrier Dome? Let's find out...

The University of Rhode Island was founded  in 1888, then-known as Rhode Island College of Agriculture and Mechanic Art. So unless you wanted to grow crops or make art out of jagged metal, there wasn't much there for you Realizing this, they changed the name in 1909 to Rhode Island State College. It finally became URI in 1951.

RICAMA played its first college football game in 1895 against Pawtucket High School. Fair or not, they won 6-0. Their second game was against something called "Friends School." They were no match for a bunch of friends, losing 10-0.

On and on they went, slowly climbing the college football ladder. In 1971 they moved to 1-AA (FCS) and in 2007 they joined the CAA.

It's been tough goings for the Rams in recent years. They haven't had a winning season since 2001 and they finished 1-10 as recently as 2009. They'e coming off a 5-6 season that included a 31-0 loss to Buffalo, though they did beat Villanova. Head coach Joe Trainer improved the team by four games in his 2nd season on the job, something Syracuse fans can appreciate.

As you probably know, their nickname is the Rams and their mascot is Rhody The Ram. Originally it was indeed a live ram but it's been a costume for a long time. Rhody has had quite a few different looks, including Nightmare Fuel Rhody in the 1970's (see in video below). I have no idea why they changed that costume. If I saw that walking towards me, I'd pee my pants every single time. Just peed my pants right now looking at it.

You can watch the reveal of his latest look in this video from a couple years back. Rhody really seems to like flexing. Egomaniac. Maybe he's just overcompensating for the time he was assaulted by Providence fans.

The Rams wear blue. But not just any blue. A light blue officially referred to as Keaney blue. But honestly, you can just call it light blue.

Rhode Island's athletic director is Thorr Bjorn. Keep your wife and children close by at the game on Saturday, there's a 45% chance he'll end up pillaging if URI loses.

The Rams will be debuting brand new unis when they play us this weekend. The road jerseys are white with navy numbers outlined in Keaney Blue and navy RI letters at the neck. I'm not a fan of the solid blue pants, which make the whole ensemble look incomplete, like a practice uniform. But what do I know? 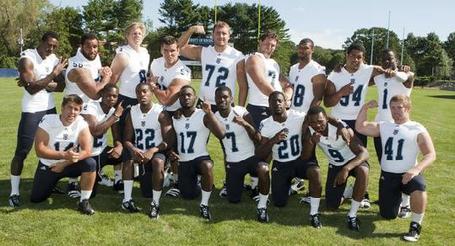 The Juice did a nice preview of the team itself, which features QB Steve "The Survivor" Probst. Since this is their first game of the season, we don't have much gamefilm to look at. Check out some video of the team in camp below.

Did you say you'd like to know if any Rhode Island students have made fake rap videos and put them on YouTube? Why yes, as a matter of fact...