Before I moved to Seattle, I lived in Los Angeles from 2002 to 2010. So I know my Hollywood Hills from my Topanga Canyons. Just like last year's Syracuse Fan Guide To Seattle, I'm here to help with some pointer that the many Orange fans heading to Southern California this weekend for the Syracuse Orange vs. USC Trojans game can hopefully use.

Here' how the guide is going to break down...

I'll b honest with you. I was gonna do this whole big breakdown of all the Los Angeles neighborhoods, what's great about them and what's not. I was gonna be detailed and specific and give you the kind of insider tips you can't get anywhere else.

But I'm lazy. So instead, you get this map. What this map does is provide you with a Zone Of Love (green). The ZOL is the area of Los Angeles you want to stay in. If you step or drive outside the ZOL, I want you to stop, drop, look for an adult and then return to the ZOL as soon as humanly possible (To be fair, not all red NO Zones are bad, some are just so boring and suburban that your face will melt Raiders of the Lost Ark-style if you spend too much time there. But many of them are also nowhere you want to be wearing a Syracuse shirt and looking like a tourist). 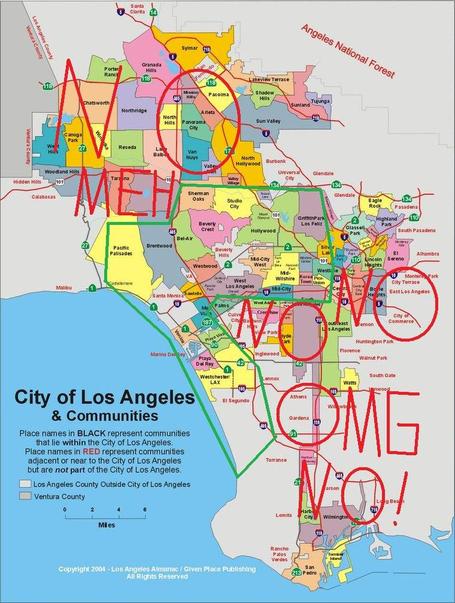 (Admittedly, this is a very incomplete list. Locals, feel free to fill in the many blanks...)

Mexican - I don't care what you think Mexicon food is where you're from. It's crap. You want real Mexican food? Welcome to the Mexican Food Capital of the World (except for, you know, Mexico).

Tito’s Tacos (Marina del Rey) - If you like the actually heat level of your taco filling to be "molten." this is your place.

Paco's Tacos (Varous) - Fresh tortillas and hot chips. What else do you want?

Don Antonio's (Santa Monica) - This place is mostly about the ambiance. It's dark, it's old school and whatever you order, you're going to get a lot of it.

Pancho's - (Manhattan Beach) - I used to live across the street from this place. Nice atmosphere, good food and it's a block off the beach, perfect for walking off your meal afterward.

El Coyote - (Hollywood) - A lot of folks swear by this place. I got food poisoning there. So, you know...

Burgers - For a place known for being so health-conscious, LA sure does have a lot of good burger joints.

In N Out (All over) - Yes it's a fast food place but I'm willing to bet you haven't had many fast food burgers better. If you've been enjoying Five Guys Who Knock Off In N' Out or whatever that place is called, try the original and see who stacks up. Order the double-double "animal-style" for the full effect.

Father's Office (Santa Monica) - Generally-accepted as one of the best burgers in town. Be forewarned, they've got some kind of snobby rule about no ketchup so don't expect any. Also be forewarned, it's often packed and runs out of room quickly.

The Apple Pan (Santa Monica-ish) - Imagine if Johnny Rockets wasn't a chain, got rid of all the kitsch, got rid of all its waitstaff, was just a giant bar setting with no tables and you were served by a surly old guy who's in no mood for your lip...that's the Apple Pan. And the burgers are really good, too.

Umami Burger (Los Angeles) - Never been but enough people rave about it to warrant inclusion.

The Shack (Playa del Rey) - The Shackburger comes with a sliced sausage on top, just in case you needed to overwhelm your meat senses. Bonus, if you're a Philadelphia Eagles fan, this is where you're watching the Eagles game on Sunday.

Versailles (Various) - Versaille is dingy and doesn't look like much when you walk in. Don't worry about that. Sit down and order the Cuban Style Chicken or Pork and then enjoy one of the most satisfying meals you've ever had. One note...you will REEK of garlic for 24 hours following this meal, so keep that in mind.

Handy J Car Wash (Marina del Rey) - "Hold on...you want me to go to a car wash to eat steak?" Yes I do. "Is this some kind of Breaking Bad car wash front?" Perhaps. But in the little bulding next to the Handy J, they serve some of the most fantastic BBQ tri-tip steak you'll ever have.

Vegetarian/Vegan - This is LA after all

Real Food Daily (Santa Monica/Hollywood) - You can't go wrong in either of their locales. If you go, get one of those ginger beers that actually tastes like ginger and the soba noodle salad.

C&O Trattoria (Marina del Rey) - The food's pretty good but you're here for the garlic balls. They'll be waiting for you when you get there and when your garlic ball plate is empty, here come more. Stuff your face!

Bay City Imports (Santa Monica) - It's an Italian Deli but I URGE you to go there and get the meatball sub (or any sub for that matter). You will thank me profusely later.

Sushi Zo - Considered by many the best affordable sushi in town.

James Beach (Venice) - If you're in the mood for a victory souffle after Syracuse's win, look no further. James Beach is actually a pretty solid restaurant in general, so feel free to eat more than just the dessert.

Wahoo's (Various) - It's a chain but I don't care. The fish tacos are fantastic. You will eat them and enjoy them.

Phillipe's (Various) - Birthplace of the French Dip, or so they say.

Ford's Filling Station (Culver City) - Han Solo's son runs this restaurant that offers really fantastic flatbreads, cheeses and whatnot. Lots of beers on tap as well. Stick around in Culver City "downtown" which is a cool, little area.

The Local Yolk (Manhattan Beach) - I still have a coffee mug from this greasy spoon. The nicest greasy spoon you'll ever eat in, too. A block from the beach, huge omelettes and very cheap. There's an omelette named after the Raiders and it's full of meat, so, you'll probably get that one.

Pink's - The famous hot dog place serves a good hot dog but it ain't worth standing in line for an hour to get it. Fun fact, if the line out front isn't long enough, they'll often slow down their service to make sure the line gets longer. Awesome!

Most Pizza Places - Especially any one claiming to be New York-style or East Coast-style. It's almost all crap. And overpriced crap at that.

Cheesecake Factory - So help me God...

Jack In The Box - You might have a weird urge to try it because you've been hearing about their stupid commercials for years. Don't. It's really, really horrible. I mean, seriously.

Randy's Donuts - It's iconic but it's in a sketchy part of town all by itself and, to be honest, the donuts aren't very good.