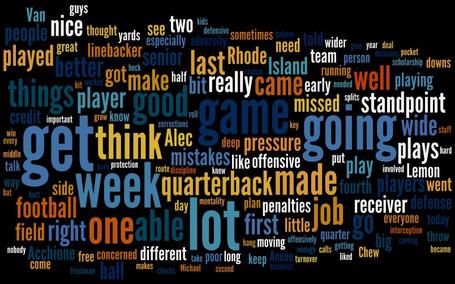 Doug Marrone's talking about the Syracuse Orange and their 21-14 win over Rhode Island. Better listen.

"You don’t like to go for it on fourth down, which we were doing moving the football. I tried to challenge them from that standpoint to see if we could get it going."

We had a lot of things there because we didn’t really know what to expect, but it’s no excuse from our standpoint."

"I think Van has been a good player for us. I’ve been saying it since two springs ago, and I think he’s a quality wide receiver. He’s very reliable. He’s good on the deep ball and catches the ball extremely well, and I think he’s one heck of a football player, at least from my standpoint."

"It was frustrating from the standpoint getting them out on the perimeter because Coach (Scott) Shafer had some great calls, and we didn’t edge it. We made mistakes in the ability to go outside the pocket when we were running pressure right into it, which would’ve pulled him up. You can see our frustration from that standpoint."

"Again, from a strategic standpoint, there are a lot of things that that we did not do as well as we should on offense and defense."

"Give a lot of credit to Rhode Island. They did a nice job."

"The corner did a nice job, and with hindsight 20-20 we should have went deep and scored the touchdown and threw it over his head because we had a guy open behind him."

"I think we worked on pressure quite a bit during the week, and I think Rhode Island did a nice job."

"I think the officials did a nice job."

"I said it last week, but nobody really believes me, so I don’t know if I should comment on it again. I sat here last week and told you that it’s all the things that we do off the field that keeps us in games, and makes us strong and makes us able to deal with adversity. I said that last week and nobody really believes me, so for me to say it again this week, you probably won’t believe me again. Maybe by the end of the year, when we talk about structure, discipline and practicing, we have a good mentality about us (you will believe it)."