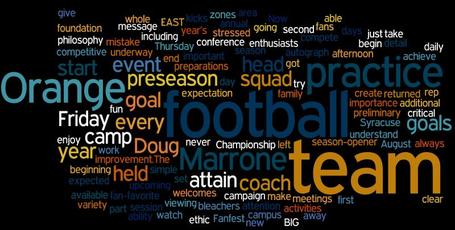 Doug Marrone gave his first Syracuse Orange football press conference of the year on Friday. As usual, let's see where we stand with the big three phrases:

So from a standpoint of making sure that they learn what we want them to do is our goal.

And we need to start over, build on that, and make sure that from a fundamental standpoint we have the skills so that we can be successful once we start getting into the game planning, which will occur about 10 days prior to the Wake Forest game."

So from a national standpoint, we put ourselves out there as a conference.

And from a recruiting standpoint, you can get out there and show them what you're doing on the field, and hopefully have some highlights in between of people like Ryan Nassib, who is a 3.7 student, and Adam Harris who is a potential Academic All-American.

He's been in the system for a while, and we look forward to (running back) Antwon Bailey being back there to carry the load, even though we will miss Delone Carter and what we did for our football team from leadership and also what he did from a productivity standpoint.

I felt it last year but I really think it's true now. The days of tremendous are behind us ('09 - '10). R.I.P. And it's too early to think about "nice job." People need to start doing nice jobs in order for him to mention that they have.

That said, we truly live in the Golden Age of Standpoint. From the standpoint of the way Doug Marrone uses it, of course.

When mentioning the fullbacks, Marrone namechecks Adam Harris and Thomas Trendowski but not Tombe Kose.

QUOTE OF THE PRESSER:

First off, I want everyone to know, and the players will tell you this, we talked to the players and we have signed onto our goals, and our goal as a football team, make no mistake about it, is to be able to compete for a BIG EAST Championship. That's what we're expected to do. Now that we're in camp, it's very important to understand that we have a philosophy that we never start where we left off. We always have to start from the beginning. So what we're going to try to create is this work ethic, this foundation that will give us the ability to attain our goals. Not only attain our goal for this year, but for every year to be a competitive football team in this conference.