Syracuse Football: Get To Know Your Orange Man - #92 Riley Dixon

Share All sharing options for: Syracuse Football: Get To Know Your Orange Man - #92 Riley Dixon

We counted down every SU football player from Chandler Jones (#99) to Phil Thomas (#1), as you can see here. However, some walk-ons slipped through the cracks. That's something we'll have to remedy, now isn't it?

Next up on your Orange-Man Orientation, #92, Riley Dixon.

2010 Stats:  Not sure of his stats but he did well enough to be named to the 2010 All-CNY Team and the Class AA 3rd-Team. However, he had a rough finish to his high school career when his potentially-game-winning kick veered to the right, giving Baldwinsville a 15-13 victory over CBA at the Carrier Dome in the Section III Class AA football championship. Let that be the last time he misses he kick with the game on the line in the Dome...

2011 Projections: Never say never. Dixon injected himself into the Great Punting Battle of 2011. Shane Raupers won but we all know how quickly a kicker can lose their spot in the world of football. SU isn't above putting a walk-on into a bigtime kicking role if they earn it. That said, Dixon also has scholarship kicker Jonathan Fisher ahead of him as well. 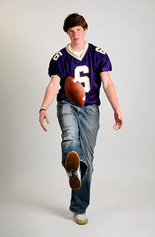 How'd He Get Here?: He went to CBA. We needed a little kicking depth. You know how that goes...

Scouts/Rivals Said:. He wasn't exactly on their radars.

Money Quote: "It took off dead straight," Dixon said. "I thought it was one of the best kicks I ever had. Then, it started to fade right. I should have kicked it more to the left."

Links of Wonder:  Here's a panoramic shot of that ill-fated kick.

Doug Marrone Thinks: "Mac used to tell us: ‘Make sure you appreciate the walk-ons. You see how hard they’re working? They’ll be successful in life and you’ll want to be their friends forever.’ I give them credit. I give them all credit."

Interesting Nugget O'Interest: Riley is also something of a baseball player. Too bad we don't have a team for that...

Let Us Get A Good Look Atchya: Lucky for him, I can't find video of that kick that's going to haunt him until he gets the chance to kick a game-winner for the Orange...