Operation Who Is This Guy: Angry Syracuse Fan Who Hates Pat Forde

Share All sharing options for: Operation Who Is This Guy: Angry Syracuse Fan Who Hates Pat Forde

If you happen to catch it before it's gone, there's a very angry Syracuse fan in a group of college football fan voicing his anger towards a referee on the ESPN.com homepage: 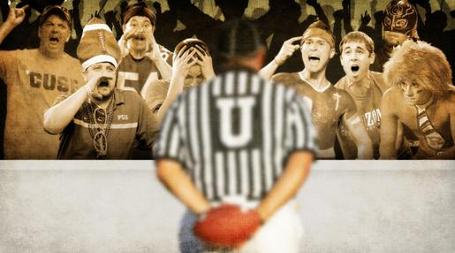 Who is that spurned Cuse fan?

One thing we can clear up...Angry Cuse Guy isn't actually yelling at the referee, he's yelling at Pat Forde, who's gone ahead and put that patented Syracuse-disdain to good use already this season, picking Wake Forest over the Orange.

The Big East (37) will have at least two bad losses. The schedule is set up for opening success: seven of the eight teams at home, and all seven of those are favored. But Syracuse will be taken down by visiting Wake Forest, and Louisville will be stunned by Murray State. The Orange and the Cardinals are both positioned to backslide a bit after significant improvements last season and look vulnerable in their openers.

Syracuse was fortunate in 2010 (few injuries, 4-0 in games decided by seven points or less) and has six new defensive starters who combined to do very little in 2010. They will be facing Jim Grobe's most experienced Wake team in several years.

It's his opinion, whatever. But I'll just direct you back to my Three Common Misconceptions About The 2011 Syracuse Orange Football Team post and we'll leave it at that until Thursday. Keep Pat's Twitter handle handy, if you know what I mean...