Syracuse Football: Get To Know Your Orange Man - #8 Corey Edsall

Share All sharing options for: Syracuse Football: Get To Know Your Orange Man - #8 Corey Edsall

Next up on your Orange-Man Orientation, #8, Corey Edsall.

2011 Projections: Probably the same as 2010. As a walk-on freshman, Edsall's chances for playing time aren't great. However, the fact that he's now listed at two positions gives me a little bit of a better shot. The way the punting competition is going...who knows. I'd say it's crazy that a freshman walk-on would end up kicking for us, but...Ryan Lichtenstein...

Edsall also has experience as a long snapper. TRIPLE THREAT.

How'd He Get Here?: Maybe you've heard of his Dad? Former UConn coach and current Maryland coach Randy Edsall is a Syracuse graduate as well as former coach. He and Marrone coached together at Georgia Tech.

Edsall was a standout quarterback at East Catholic High School in Manchester, Conn. He was named All-State Honorable Mention as a punter and attended a camp at Boston College. I'm guessing that he didn't want to play for Dad at Maryland and enrolling at UConn would have been awkward, so, Syracuse made sense.

Money Quote: "When he moved me in, he just came up here and said a lot's changed since he coached here." - Corey on his Dad.

Links of Wonder: Corey joined his Dad at the Lowe's Motor Speedway back in 2007. 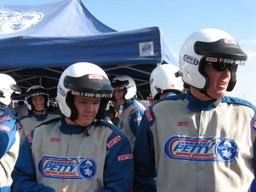 Doug Marrone Thinks: "We're excited about having him on the team," Marrone said at Big East media day on Tuesday. "We're looking for him to produce for us in some type of way. He can do a lot of different things."

Interesting Nugget O'Interest: Edsall ran a few series at the end of the scrimmage last week, throwing a 45-yard TD pass to fellow walk-on Cayden Feifer down the left sideline.

Interesting Nugget O'Interest 2: Corey hasn't played a down of college football yet but he's already had his Welcome To College moment, courtesy of Akron (you knew there had to be an Akron tie-in)...

Randy Edsall's 15-year old son, Corey, was the kid who was taken out on the sidelines on the final play of the first half. He got blasted pretty hard by Akron's Bryan Williams near the 5-yard line marker. Time ran out after the play, foiling a potential Akron score, because the referee ruled forward progress on Williams before he was knocked out of bounds. "You (strategically) put your people wherever you can," Randy Edsall joked. Corey is fine.

Let Us Get A Good Look Atchya: