Syracuse Football: Get to Know Your Orange Man -- #12 Ryan Nassib

Share All sharing options for: Syracuse Football: Get to Know Your Orange Man -- #12 Ryan Nassib

Say it with me: NAH-sib.

The next guy that says Nah-SEEB is getting a ridiculously huge helmet smacked against his teeth.

Catch up on all the profiles you may have missed by clicking this fancy blue text.

HAT SIZE: Whatever size would be necessary to put a humorously large hat on a gigantic watermelon.

2010 STATS: I'm not a doctor or anything, but I was worried that Nassib's enormous cranium would really impede his ability to sling the ball all over the yard.  You know, balance issues and such.  Maybe even a career-ending level of fatigue in his neck due to the need to keep that colossal dream-filled orb upright.

As it turns out, I was way wrong.  Megamelon -- despite his double-stuffed helmet -- put together a pretty nice effort in 2010:

Nassib was also named to the DOCTOR Daryl Gross Honor Roll of Honor for Achievement in the Fields of Academics and Having a Gargantuan Cranium for both semesters last year.

2011 PROJECTIONS:  Unless he seriously injures his mammoth bean in the next 10 days or so, he's Syracuse's starting quarterback.  The preseason depth chart agrees.  Here's what Lyons wrote about Megamelon in his post-spring quarterback report card:

Ryan Nassib: (A) - Pinstripe Bowl Ryan Nassib stuck around for spring ball, and really looked good almost every day in practice.  He has the arm to make almost every throw, and is reaping the benefits of a full stable of talented, healthy receivers.  He's almost completely rid himself of some of his worst habits, like the 'happy feet' he got in the pocket last year. His command of the pocket, and awareness of the pass rush is very good as well.  It's remarkable how much he's improved in that regard.  We're in good hands for the next two seasons with Ryan at the helm.

Maybe his head is so large because of all the knowledge he's gained under Marrone's tutelage?  Someone ask science if this is possible.

WHAT DID SCOUT/RIVALS SAY?: Scout took one look at his skull structure-helmet ratio and was, like, "Two stars, man." Rivals was similarly unimpressed with Nassib's proclivity for wearing a helmet that was presumably exposed to nuclear radiation and gave him a double star rating.

HOW'D HE GET HERE? Apparently through some kind of witchcraft because he bought whatever Greg Robinson and Phil Earley were spouting into the pumpkin on his shoulders:

Nassib was recruited by former Syracuse head coach Greg Robinson and Phil Earley and signed with the Orange in 2008. They brought Nassib in at a time when the quarterback position with the Orange seemed overstocked with Andrew Robinson, Cameron Dantley, Cody Catalina and David Legree. They also signed him when it was clear the coaching staff was on the thinnest of ice. It seemed that Nassib wavered near the end of his recruitment, though ultimately signed.

Then Greg Paulus walked in the door in 2009 and Nassib had to wait his turn again.  It's a minor miracle that Megamelon's immense coconut decided to hang around The Hill.

MONEY QUOTE: You know that massive brain melon encassed in Nassib's titanic skull?  Well it's filled with all sorts of football plays and stuff (which is good):

"It’s the second spring with the new playbook," he said. "I’ve had a whole year to digest it. The rest of the offense also has another year within the system. We know what we’re doing."

Last spring, Nassib said the offense had to move much slower while installing various packages and sets of plays. This year, there’s more time to work on specifics.

"We’re doing a lot more things with our timing. We’re starting really know each other and where they’re going to be ... who runs well with specific routes," Nassib said of the receiving corps. 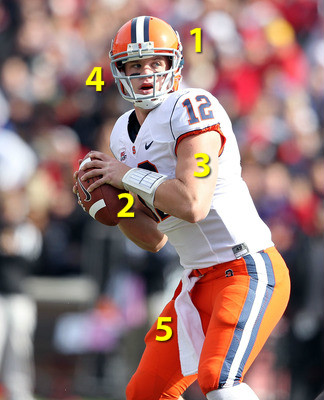 2.  Portable Playbook: Allows for his stupendous noggin to stay uncluttered with distractions.

3.  Portable Cannon: Easily attaches to his shoulder for on-the-go rocketing and decimation.

4.  DK Mode Lifestyle: Why buy a bobblehead when you can live like one?