Day 14 of Syracuse Orange football practice was the Ernie Davis scrimmage. Let's find out how our boys performed in semi-real action.

Ryan Nassib looks "about as ready as he can be for the season" according to Brent Axe.

The highlight of the scrimmage came on the very first series when Nassib hooked up with junior wide receiver Alec Lemon for a 79-yard touchdown up the middle.

Axe was more impressed with John Kinder than Charlie Loeb in the scrimmage. Terrell Hunt "flashed" but he's got a lot of work to do.

Antwon Bailey didn't do a whole lot of much, probably for the best. Steven Rene had a nice 21-yard TD run but otherwise it wasn't too much to get excited about. 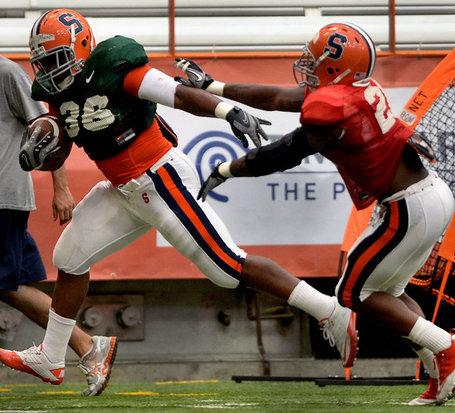 Dorian Graham sat out the game with a sore elbow.

The shotgun has returned:

It was a real plus seeing how much shotgun was used and looks to be apart of the offense this year. Macky McPherson has been handling that job with ease.

Deon Goggins and Micah Robinson really stepped up in the game.

Goggins, Cory Boatman, Jay Bromley and Eric Crume are looking like a rotating unit on the D-line interior heading into the season. 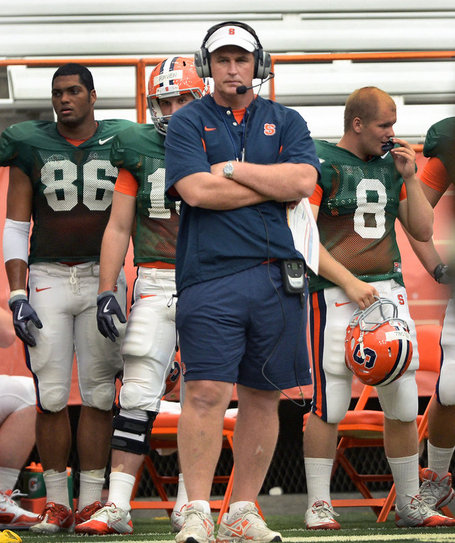 Nothing much here other than to say that no one really stood out and the depth at this spot remains a mystery.

Desir can flat out move and is one of those players that just finds his way into plays and has a good football sense about him.

The punting battle between Shane Raupers and Jonathan Fisher remains too close to call. That said, it's not because both are playing terribly. Both had solid boots in the scrimmage.

Ross "Das Boot" Krautman made two of three field goals — from 22 and 38 yards. The other one was blocked.

Great news on the Greg Adkins front. Adkins had his gallbladder removed on Friday and he's well on the road to recovery:

“He had a scope today,” head coach Doug Marrone said following his team’s light workout in shorts and shoulder pads in preparation for today’s annual Ernie Davis scrimmage in the Carrier Dome. “He’s doing well. He’s resting comfortably. He’ll be released from the hospital over the weekend and will be back at work next week, which is a great thing. So we’re very excited about that, which is not good news but great news for us.”

An interview with freshman linebacker Cameron Lynch during media day 2011.