The Big East will have nine football teams at the start of play next season and within reason to think that one way or another we'll have a tenth shortly-thereafter. At that point you start to wonder if the conference will make the move to have something every other BCS conference (and other non-BCS conferences) have...a championship game.

Because there is no football stadium with a large-enough capacity in Providence, John Marinnato loves the idea of holding it in New York (theoretically-speaking).

Now, in theory, he's right. That sounds amazing. An early December showdown between two great Big East squads (or the equivalent thereof) for the right to get killed by Florida State in the Orange Bowl. We'll assume that the location would be the Meadowlands and not Yankee Stadium just given logistics and all that, which makes for a negligible difference. 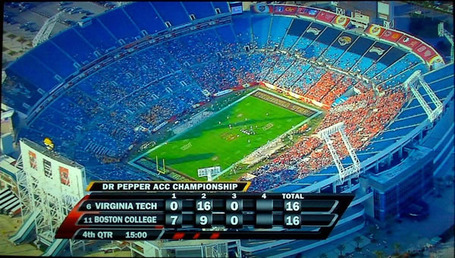 In theory, this game should be packed. Two of the top teams in the nation battling it out for conference supremacy and the right to go to a BCS Bowl. But, I mean...look at that. That's beyond embarrassing.

And I hear you...that's Jacksonville, this is New York City. But there's a lot of factors that don't seem to jive.

The Big East Ain't All That "East" Anymore

If the game pitted Syracuse vs. Rutgers...well then you've got yourself a built-in audience that will show up in droves. But what if it's TCU vs. South Florida? That's a helluva hike for both fanbases, not to mention the fact that both of those teams are also gearing up for bowl games in a few weeks. If given a choice between a December football game in the Northeast or a December football game in sunny Florida...it's tough to say many fans would make the trek.

Let's Remember Who We're Dealing With

I'll support Big East football as much as a can but I have to be realistic. The chances of this conference producing two top-ten teams in the same season seems unlikely. How do I know? Cause I'm pretty sure we haven't done it since Miami and Virginia Tech left (go ahead and fact-check me). Yes, TCU's arrival changes things but the most likely scenario is that this game would feature one decently-ranked team and one team that may or may not be ranked at all. In that case, nobody wins (except the winner of the game, I suppose).

New York Cares Not For Your Cincinnati Football

We can argue all day about whether or not Syracuse, Rutgers or UConn is NYC's Team and how much support any of those programs truly gets from NYC, but there's one thing we can all agree on...New York City couldn't give a rat's ass about the other five (soon-to-be six) Big East teams. So even if one of those teams makes it in, how much of a draw in a 82K capacity stadium would UConn vs. Louisville be, especially if both teams already played and both fanbases also have a bowl to look forward to?