Day 12 of Syracuse Orange football practice showed us that while the Orange may still be nicked up, they team is really coming together.

Antwon Bailey spent much of the day on the sidelines as part of Doug Marrone's "Take A Breater" initiative.
Prince-Tyson Gulley and Steve Rene ended up taking the bulk of the snaps.

Adonis Ameen-Moore is a large fellow and he wants you to know that he's aware of this:

Coach Wheatley is impressed with AAM's abilities, however he doesn't seem convinced Adonis will see much action in 2011:

It should be noted, however, that when asked who the toughest RB to tackle is, Marquis Spruill did not hesitate in saying Ameen-Moore.

Jarrod West is moving up the depth chart very quickly and even has Doug Marrone calling him the best receiver in camp. High praise.

Nick Provo had the day off.

I'm not sure if the H-Back should go here or in RBs but David Stevens is defying convention in a lot of ways. He's emerged as Ryan Nassib's No. 1 target...bet you didn't see that coming.

"David Stevens is our leading receiver in camp, and that’s a credit to him," Marrone said. "He’s done a lot of good things, and I’m excited about what his role will be when we start gameplanning for the season."

Chandler Jones had the day off.

Mikhail Marinovich returned from his day off and responded well.

"An example is Mikhail Marinovich, who we rested yesterday and today. We wind up putting Micah Robinson in there, and he responded," Marrone said of the second-year freshman. "And that’s a good thing. And that’s going on in some of the other positions."

Marquis Spruill has a leg bruise that's limiting him in practice.

The offense and defense had some battles in practice and Dan Vaughan thinks the defense won:

"I think we took a big step forward today," Vaughan said of the scrimmaging during the later part of practice.

"It was both offense and defense going at it, and the defense made the stop, and we went crazy," the starting outside linebacker said. "So I think we’re getting there." 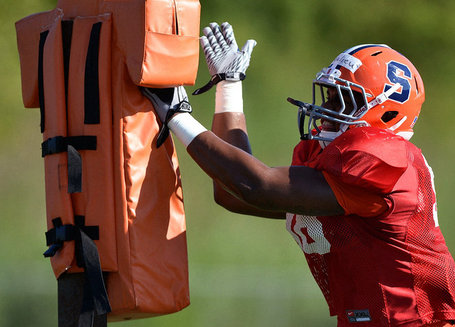 #SHAMARKO Thomas was in full pads for the second straight day. He's being slowly worked back into contact drills, but all signs are encouraging.

What's up with Kevyn Scott? The lone starting secondary player to not get hurt seems...hurt. He sat out of his second-straight practice. Brandon Reddish took his place.

Phillip Thomas continues to work without a helmet and take things slow as his jaw heals.

Durell Eskridge, Jeremi Wilkes and Olando Fisher all continue to get lots of looks on the field.

Marrone says the punting race is "neck and neck" and too close to call.

Remember how Marrone was all worried about the team's mental toughness? He's not worried anymore:

"The team seems more focused," he said, because of fewer distractions both on and off the field. "We’re all in the right frame of mind right now."

OC Nate Hackett likes seeing the way his offense is playing, and learning, through the fatigue:

"It's going really well," Hackett said. "I think we've kind of lost track of the days. It's always up and down. The guys' legs start going down, so you have to pick them back up and fight through the pain. "This week is that time when they're so dead that you have to keep them learning and keep them pushing themselves. I think they're learning how to fight through the fatigue, which was some of the stuff that we didn't do well last year. They have the mental stuff, now they can understand how it works with the fatigue.