Get To Know Your Orange Man-- #52 Ollie Haney

Share All sharing options for: Get To Know Your Orange Man-- #52 Ollie Haney

The Orange-Man Orientation rolls along. If you've missed any profiles, put your cursor over this blue link. It'll turn into a pointy finger, and then you click. It's that simple!

2010 Stats: Ollie ripped some chest muscles in spring ball last year. There's no stats to report, but good news: he was granted a redshirt.

2011 Projections: One would think that with all the question marks at defensive tackle, Big Ollie would've seen some snaps come Fall. Problem is, the dude can't get healthy, and he's going to miss his second straight season with an injury. Here's a sad, but true little tidbit from The Fizz about where Haney stands:

"He (Haney) is the Carl Cutler of defensive tackles."

How'd He Get Here?: Back when he was known as "Oliver," Haney committed to the Minnesota Golden Gophers.  His dad told him not to rush into a decision, and he started to reconsider. The firing of then-head coach Glen Mason pushed him to come play for the good guys. Donnie Webb has more in a blurb right here.

Scouts/Rivals Said: Haneys torn muscles are awarded no points, and may God have mercy on their souls. Oh, and he's a two-star guy from Rivals.

Money Quote: Not too much from Haney on the Interweb.

Doug Marrone Thinks: HCDM must not happy to see Haney banged up again, after this outburst last spring following a rash of injuries:

"It's unbelievable. It's like every day," said Marrone, who also doesn't have a full complement of scholarship players. "I've lived my life well. I've done a lot of good deeds. I'm hoping somewhere along the line it starts to pay off.

Marrone invoking karma is a gem of a find, hold your applause.

The Ollie Haney Center for Children Who Can't Read Good And Wanna Learn To Do Other Stuff Good Too has yet to open, but keep your eyes peeled.

Let Us Take A good Look Atchya: Check out this dapper young man (but also because there aren't any videos to post)! 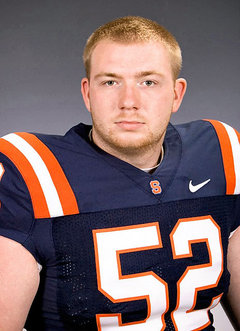