Syracuse Football: Get to Know Your Orange Man -- #54 Mikhail Marinovich

Share All sharing options for: Syracuse Football: Get to Know Your Orange Man -- #54 Mikhail Marinovich

Only 56 days until football season starts.  We're going to be cutting this countdown close, yo.

Catch up on all the profiles you may have missed by clicking this fancy blue text.

2010 STATS: As second in command of Syracuse's Quarterback Homicide Unit (its chief is Chandler Jones, a man that would chew the leg off of a passer if it wouldn't result in a 15-yard penalty and 10-15 years in Leavenworth), Marinovich put together a pretty nice season in 2010:

That ain't nothing to sneeze at, son.

Unless something terrible happens (everyone rub their rabbit's foot!), Marinovich is going to anchor one of the Orange's defensive end positions for the balance of 2011. There is some talent behind him (Brandon Sharpe does have a knack for rushing the passer and Torrey Ball can knock some heads when called upon), but Marinovich's speed and strength are probably too much for a potential usurper to overcome.

Coach Marrone totally agrees with me and put Marinovich on the top line of his post-spring depth chart.  Glad we're on the same page, superbestfriendforever.

HOW'D HE GET HERE: Like I said: He went to Junipero Serra Catholic and prepped at Milford Academy.  Read all of the words on your Internet computing machine, dummy.

Oh, you want some kind of sappy life event that sent him up to The Hill?  First, you've got to get out of the house more; second, you have to stop letting your girlfriend pick the flick for movie night.  You're turning into a shell of yourself, brother.

Anyway, California is for yutzes and he just wanted to get the hell out of Dodge:

Despite being a two-year starter at defensive end for one of the Big East's best defenses, Syracuse's Mikhail Marinovich operates in relative obscurity.

That's pretty amazing given his last name and family history. And that's a major reason why Marinovich came to Syracuse, which is about as far away as you can get from his Southern California home and still play major college football.

"At home, I'm recognized a lot but sometimes not for the best reasons," he said. "So it was good to come out here and really make a name for myself."

He also had offers from Buffalo, Miami (FL), and Pittsburgh.  He obviously fell in love with Syracuse's salt potatoes instead of Miami's, well, everything.

"I wouldn’t be satisfied with that," declared Mikhail Marinovich, the senior defensive end, of a reprise of last season. "I don’t think anybody here would be. Last year’s seniors really set the bar for us, and I think to just meet what they did wouldn’t be good enough. I think it would be looked at as a bad season. So we’re shooting for higher than that and see where we can get to."

Honestly.  Homicide will be committed in the Dome this year.  His jersey number should be 187.

INTERESTING NUGGET O' INTEREST: You know this, but it requires some repeating: His father was the worst Little League parent in the history of psycopath Little League parents.  The stuff about his brother aside, ol' Marv Marinovich was hoping to turn young Mikhail into his own Ivan Drago:

Mikhail is 18 years younger than Todd but saw what his sibling went through [Eastern Bloc training methods]. As with Todd, Marv was very restrictive with Mikhail's diet and showed no mercy as Mikhail practiced for hours at Little League sports.

"Some things were great, while other things weren't as much," Mikhail says. "He tried his best to get me the tools I need to succeed, and I am grateful for that. He lightened up on me a little. It wasn't as bad as Todd."

LINKS OF WONDER: Will I reference the failed hookah business?  Or the super terrific modeling effort?

Nope and nope.  He got hitched last year.  I hope you all got him a nice set of candlesticks or something.

WHAT DOES MARRONE THINK?: He thinks that he's staring into the eyes of signal caller serial killers: 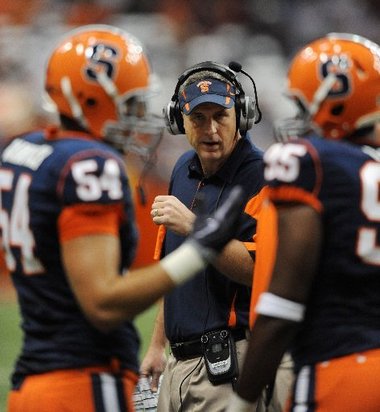 A DANCING RUSSIAN BEAR AS FOOTBALL THEORY: Russia is a weird place.  I imagine that this runs on loop in Mikhail's head:

I want that giant triangular guitar.