Syracuse Football: Get To Know Your Orange Man - #56 Cory Boatman

Share All sharing options for: Syracuse Football: Get To Know Your Orange Man - #56 Cory Boatman

Next up on your Orange-Man Orientation, #56 Cory Boatman.

2010 Stats: Boatman played in all 13 games, though primarily on special teams. He recorded two tackles on the season.

2011 Projections: 2011 is Cory Boatman's time to shine. He's slotted in as a starting defensive tackle alongside Jay Bromley. It's fair to say Cory does not have a lock on things as he's got a lot of young guys battling for his spot. If he can hold his ground, however, he's primed for a big senior season. The question will be whether or not a DT at 274 can hold his ground all day.

How'd He Get Here?: Boatman had offers from Rutgers, Miami (OH) and Cincinnati in hand but decided to go with Syracuse for the chance to play immediately (which didn't work out all that well, he DNP'd freshman year).

Scouts/Rivals Said: Scout gave him the ol' two-star treatment, as did Rivals.

Money Quote: Boatman said of then-coach Greg Robinson upon committing to SU, ‘He’s taking the program in the right direction and I want to be a part of it." Ouch.

Links of Wonder: Boatman played some basketball in high school as well and, as you can imagine, he came from the Robert "Tractor" Trailor mold.

Doug Marrone Thinks: Nothing specific, though Marrone did say that the defensive interior would be "by committee." In other words, Boatman's not done convincing HCDM he's the man for the job.

Let Us Get A Good Look Atchya: Here's Cory and some other Orangemen celebrating the Pinstripe Bowl win. 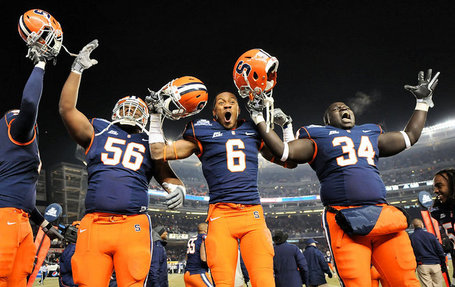