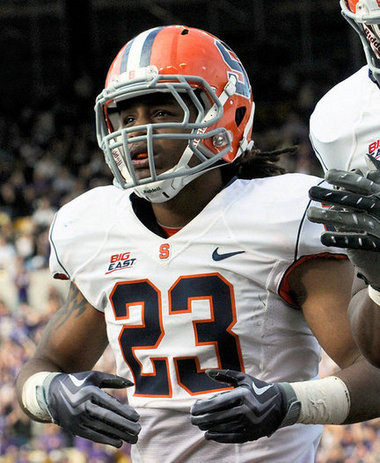 UPDATE: Just to get away from the Twittering and Facebooking of reports, Syracuse Athletics released a statement today on Gulley getting Tony'd on the playground.  Here's the story from The Daily Orange.

Syracuse.com is reporting that a 19 year old year old student was stabbed multiple times at a party on Slocum Drive, South Campus last night at 1:25 AM. His injuries are not considered life threatening, and his name was not released by the University or Police. Multiple sources on the team are reporting or confirming that the 19 year old student in question is in fact, Prince-Tyson Gulley.

Needless to say thoughts and prayers are going out to Prince right now, and we can all be very thankful for Prince that his injuries are not life threatening. However, the extent of his injuries are unknown and any possible permanent or prolonged effects from this are unknown. I could be callous like certain writers from ESPN in the past and discuss how this opens the door for Adonis coming into camp. I won't, that shouldn't be discussed, and that is an issue for Hackett and Marrone to discuss. I'm sure everyone agrees with me that we just all hope Prince only suffered minor wounds and simply needs some stitches.

Instead, I'd rather discuss another issue I've seen brought up by this, one I am unfamiliar with but I'm sure students are. It's been rumored and reported this morning by people at the party and people claiming to "know" people who were at the party. The rumor is that the fight, and stabbing at the party, was perpetrated by "townies," non-SU students. South State and South Salina neighborhoods have been mentioned. I've heard personally from friends in the area who are not students, and people who were students. the uneasy relationship that sometimes results from the non-student population mingling with the student population at parties, particularly on campus where this incident occurred. I'm interested to see what a lot of you on here have to say about it.

Of course, I'll add that the Syracuse.com report makes no mention of anyone being arrested or of someone being arrested. Information is lacking at the moment, but we'll probably be hearing all about it over the afternoon. I hope assumptions and accusations aren't hurled, but that's the way this looks to be heading. Of course, there will be comments on how being at a party invited this to happen. To those people, I will say it didn't. When you are at a college party, you have a reasonable expectation that for the most part you will be surrounded by other college students, and the risk factor will be low. No report on drugs or alcohol has been made, and probably will not be made in light of the more serious events that occurred.

We all simply must hope that PTG will be AOK.

EDIT, 12:00PM: Of course, this is going to have a very big effect on the team. However, it seems it will be very big on Jerome Smith and Dyshawn Davis, who appeared to have been at the party. Jerome Smith's tweets paint the tale of the night. Luckily his last one provides a bit of optimism.

Me and @RomeSmith45 get tatted up right now. Live party tonight. Then home we go!!! Aye!!! we out this bitch cuz Lego!

Gotta leave but my dog hurting

Life is too short ... I just gotta turn a dolla into a million

Talked to my bro and he goood .... So we good #beatwake